India could be in recession, says Nobel laureate Abhijit Banerjee

Abhijeet Banerjee, during an address at the Kolkata Literary Meet, also said the priority of the government should be on refinancing the banking sector, which is in “doldrums”. 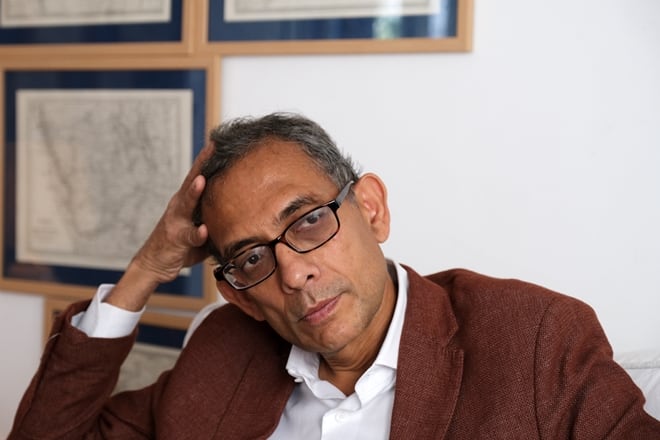 Nobel laureate and economist Abhijit Banerjee on Monday said the country could be passing through a phase of recession, and there is “nothing in the data” that suggests otherwise. Banerjee, during an address at the Kolkata Literary Meet, also said the priority of the government should be on refinancing the banking sector, which is in “doldrums”.

“What I can say is that we could be in a recession. But, I don’t know by how much. There is nothing in the data that suggests we could not be in a recession,” the author of ‘Good Economics for Hard Times’ said. He also advocated imposition of wealth tax and more redistribution. “Given the current state of inequality in India, a wealth tax is completely sensible. In such a case, more redistribution is required, and I expect this not to happen soon,” Banerjee said.

The 58-year-old Indian-American economist said the banking and infrastructure sectors were in need of funding from the government. “The banking sector is in doldrums. It needs huge funding by the government. The Centre should also look at infrastructure sector funding,” he said. Talking about the informal sector, the Nobel laureate said there is no reliable data on it.

Also Read
Economic Survey 2023 to be presented tomorrow; what is it? Check time, where and how to watch live
Wheat prices fall sharply as open market sales to start
Food & fertiliser subsidies to cross a record Rs 5.21 trn in FY23
Economic Survey 2023: CEA Nageswaran’s 5 growth boosters that will give wings to Indian economy

“The statistical apparatus is incapable of capturing short-term data on the informal sector.” Banerjee also favoured the central government’s move to privatise PSUs like Air India. On the recent cut in corporate taxes by the government, he said, “It seems the corporate sector is sitting on huge cash”.