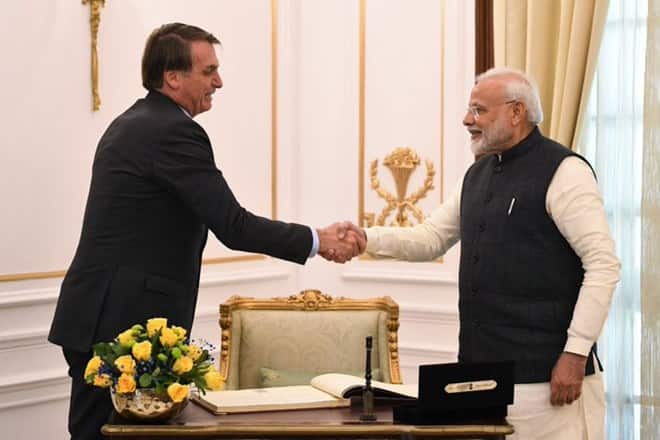 Though both leaders have agreed to resolve the issue bilaterally, according to diplomatic sources “It not clear if Brazil is going to withdraw its formal complaint raised at WTO.” (Twitter image)

India and Brazil have both agreed to address the critical issue of sugarcane subsidies and pricing policies through bilateral consultations.

Brazil, last February filed a World Trade Organisation (WTO) dispute related to the alleged domestic support provided by India in favour of agricultural producers of sugarcane and sugar. It also raised the issue regarding the export subsidies measures.

Following which in July 2019, besides Brazil, Australia and Guatemala also initiated dispute proceedings, citing India’s policies to support sugarcane farmers not in compliance with WTO rules and are distorting global trade. This led to WTO setting up a dispute settlement panel with the aim to review Indian subsidies.

Top sources have confirmed to Financial Express Online that “Prime Minister Narendra Modi and the Brazilian President Jair Bolsonaro both discussed the issue bilaterally and have agreed to address the issue through consultations at bilateral level.”

Though both leaders have agreed to resolve the issue bilaterally, according to diplomatic sources “It not clear if Brazil is going to withdraw its formal complaint raised at WTO.”

According to Aparaajita Pandey, Asst. Professor at Amity University, NOIDA, “Brazil and India are the world’s largest producer of sugar. India produces about 60 million tonnes of sugar a year and keeps a significant amount in reserves due to its dietary practices. Both India and Brazil produce sugar from sugar cane domestically and also control massive shares of sugar exports in the international market.”

“India has implemented protective policies for sugarcane farmers and sugar mill owners since 2011. These practices include the setting of a minimum buying price for sugarcane farmers and a minimum selling point for sugarcane mill owners. These minimum price points were increased in the financial year 2018-19. Australia had gone to the WTO in 2011 and was later supported by Brazil and Guatemala in its claims that such protective policies influence in the price of sugar in international markets, driving down the sugar prices and therefore driving down the profits,” says the Doctoral Candidate at the Centre for Canada, US, and Latin American Studies, Jawaharlal Nehru University.

Since, the increase in protective price points, the Brazilian farmers who believe that these policies have led to a global decline in sugar prices have appealed to the WTO again citing Indian protective policies as a violation of WTO rules and regulations.

“As far as the merit of the argument goes, the argument is baseless as the WTO effectively has no say in the domestic policies of a sovereign country. Even on the basis of precedence, India is not the only country with protective policies for its agricultural sector. Moreover, Brazil itself has flexi- sugar mills that are equipped to produce an ethanol-based biofuel that is derived from sugarcanes; a practice instituted after the 1973 oil shock under the PROALCOOL programme. So sugar mills in Brazil tend to produce sugar or bio-fuel based on market conditions and comparative advantage. Therefore the Brazilian argument against Indian protective policies and self-contradictory,” she opines.