Critics of Greece’s leftwing government reckon they have the ingredients to copy their opponents’ tactics: An angry electorate, a trending hashtag, and a call to demonstrate outside Parliament. 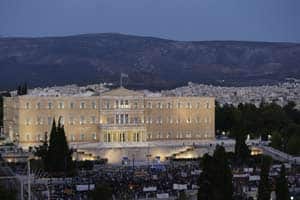 Critics of Greece’s leftwing government reckon they have the ingredients to copy their opponents’ tactics: An angry electorate, a trending hashtag, and a call to demonstrate outside Parliament.

”I don’t really go to demonstrations but Tsipras has disappointed everyone,” said Philippos Asimakopoulos, a retired architect, who helped hold up a large protest banner with the words ”resign” printed in red letters.

”It’s been hard for every prime minister during the crisis. But it’s like he’s not even trying,” he said.

Wednesday’s protest was organized on social media – using the hashtag `resign’ written in Greek – in a campaign headed by 43-year-old orchestral cello player Manos Epitropakis, who was previously affiliated with Socialist party politics.

Epitropakis said the protest had no direct party backing, though the conservative opposition on Wednesday publicly expressed support for the event.

”The government no longer has an ideological backbone. We want them to get the message that society no longer supports them,” Epitropakis told state-run ERT television before the rally.

Several government officials mocked the gathering, questioning its political independence and claiming it was supported by news media backed by a corrupt financial elite.

After years of financial hardship, Greece is expected to remain in mild recession this year before returning to growth in 2017.

On Wednesday, the Bank of Greece backed international forecasts that the country’s economy should grow 2.5 percent next year – close to the figures of 2.7 percent growth given by the European Commission and the International Monetary Fund.

The report was published a day before the eurozone rescue fund is expected to approve new bailout loan installments worth 10.3 billion euros ($11.5 billion) for Greece.

More Stories on
Greece
Next Story
Monsoon in India: IMD forecast says it continues to remain in weak phase