The highways sector is progressively looking skywards for solutions. 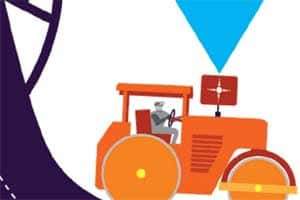 To start off, the NHAI will initiate a couple of pilot projects with both the organisations to identify and finalise actual use and benefits of both satellite data and spatial technology and unmanned aerial vehicle (UAV) technology in highway and infrastructure sector.

The highways sector is progressively looking skywards for solutions. After its bid to tap the Indian Space Research Organisation’s (ISRO) famed frugal engineering skills to develop a battery prototype than can be retro-fitted into old diesel vehicles for delivering motive power, the roads ministry had reached out to the ISRO again to deploy spatial technology for monitoring and managing national highways.

A collaborative venture involving the satellite data and geospatial technology of the National Remote Sensing Centre (under the ISRO) and assistance from the North East Centre for Technology Application and Research (NECTAR) is to be leveraged by the National Highways Authority of India (NHAI) in preparing detailed project reports of highway and infrastructure projects, determining pre-feasibility status in new road alignments, widening roads, monitoring road segments under construction and road asset management. A pact with ISRO is on the anvil.

To start off, the NHAI will initiate a couple of pilot projects with both the organisations to identify and finalise actual use and benefits of both satellite data and spatial technology and unmanned aerial vehicle (UAV) technology in highway and infrastructure sector. “A round-the-clock technical cell would also be set up to provide project-specific data using the technology to project report consultants, engineers, staff and users,” an official overseeing the exercise said.

The use of ISRO-aided satellites and drones to monitor the highways construction programme is aimed at fast-tracking building of roads in the country and oversee the tree plantation drive. Eventually, a Road Asset Management System (RAMS) is likely to be developed for all National Highways in the country and a modern management system that will use ISRO’s GAGAN (GPS aided Geo Augmented Navigation) satellite system and BHUVAN geographic information system (GIS) application to prepare a 360-degree mapping of road assets is being readied. “This will greatly facilitate timely repair of roads, formulation of Detailed Project Reports and such other works,” the official said.

The RAMS is being developed for the entire National Highways network in India for both public funded and private funded roads. The outcome of this project, which is funded by the World Bank, will assist in the accurate and scientific planning and finalising of road projects, maintenance of roads, executing road safety measures and development of the National Highways network in India. Officials indicated that the RAMS software has functionality to interface with the indigenous Bhuvan satellite images.

The data collected will be stored and managed through a web-based application, which will be hosted in the public domain. Information collected from this project will be offered for use by the road transport ministry, state PWDs, police departments, funding agencies and private developers, they indicated.

On the proposal for the development of batteries with the assistance of ISRO, Union Minister for Road Transport & Highways Nitin Gadkari, who has had at least two meetings with scientists from the space agency on the issue, is learnt to have specifically asked them to develop lithium-ion batteries that can be used in 10-year old diesel cars.

ISRO’s recent Mars mission had a price tag of about $74 million, a fraction of the $671-million cost of NASA’s latest Mars programme. The request to the ISRO for help with low-cost batteries comes at a time when most cities in India find a place in the list of the most polluted urban habitations in the world.

Vehicular pollution in Delhi has reached record levels, with respirable suspended particulate matter at 316 micrograms per cubic metre pegged at almost 16 times of what is normal, which prompted the National Green Tribunal (NGT) in April 2015 to ban 10-year old diesel vehicles from plying in the national capital.

Technically, almost any vehicle — petrol driven or ones with diesel engines — can be converted to electric. There are numerous options for the battery pack, which provides a source of electrical power, with the most commonly available and affordable batteries being the lead-acid flooded type.

Then there are the AGM (Absorption Glass Mat) sealed maintenance free batteries that are a little more powerful and expensive. Batteries such as the Li-ion ones, while being lighter and long lasting, are more expensive.

The conversion requires the mounting of a charger, which restores energy to the batteries, a power controller that regulates the flow of energy between the battery and the electric motor, controlled by an electronic throttle.

One or more electric motors and their mechanical attachment to the driveline can also to be added.

Globally, there are several instances of such conversions. Epic Car Conversions, a Toronto-based design firm, engineers electric drive systems used for converting gasoline cars into 100 per cent electric vehicles. Models include the 1969-1976 Porsche 914, one of the more successful sports car conversions that boasts of better performance in range, acceleration and top speed than most other vehicles.

A number of manufacturers of conversion kits have made a kit specific to the 914. A 1983 Mitsubishi Starion is reported to have been converted to all-electric in 2009 by Carmel Morris and Nathan Bolton in Australia with a battery pack consisting of 45×3.2 volt nominal lithium ion batteries.

In India, Mumbai-based firm EVI claims to have developed an easy installation and reliable line of powertrains ranging from 8kw up to 90kw nominal power, suitable for both automotive and marine applications. The EVI conversion combines motors with an integrated inverter, control electronics and software, with no separate large, heavy and costly inverter needed, according to the company.

More Stories on
ISRONHAI
Next Story
Disclose all your, kin’s assets: SC to Vijay Mallya