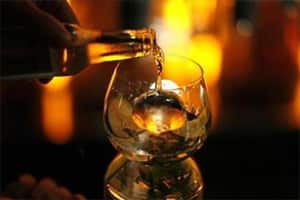 Acting on a tip off, the police intercepted a four wheeler at Guthni Bazar and seized 150 cartons, each containing 24 bottles of country-made liquor. (Reuters)

The Constitutional Amendment Bill cleared by the Cabinet on Wednesday excludes only one item — liquor — from the purview of the proposed goods and services tax (GST) and leaves to a statutorily empowered GST council to decide, among other important things, the items on which the tax will apply at any given time.

This means that another amendment to the Constitution will not be required to include petroleum products, real estate transactions and the like in the GST regime, even if the council decides to keep them out initially to accommodate the states’ concerns.

A perfect GST, experts have contended, should capture practically all transactions of businesses above a threshold value (defined at a rather low level) and the purchases for actual consumption. The Centre’s Bill doesn’t negate this concept, although moving to such a flawless regime could yet prove to be a long and arduous task, given the whims of states and the complexity of India’s polity.

The GST council will take decisions by a three-fourths majority, with the Union finance minister representing one-third of the votes cast and all states together representing the remaining two-thirds. This implies that if there is consensus among the Centre and states in the GST council, they could exempt certain products or services from GST. However, the Centre alone or a state alone or even them together would not be able to effect exemptions.

States have insisted that taxes on petroleum products, a cash cow for all states and from which some of them like Gujarat and Madhya Pradesh mobilise more than 35% of their own tax revenue right now, be kept out of the GST. As inclusion of these products right from the April 2016 launch of GST is practically impossible, the Centre is left with two options: Exempt these products for an initial period of three to four years or keep them in with a zero rate of tax.

Exempting petroleum from GST would mean exploration companies like ONGC and Reliance Industries as well as businesses using petrol, diesel, jet fuel and natural gas as their inputs would face accumulation of tax credits with little means of using them. On the other hand, if zero GST is levied on petroleum products, they would be treated like exports (which are zero-rated too). This could prompt downstream industries that incur GST on other inputs but not on petroleum to claim tax refunds, a prospect states are not happy with.

Keeping petroleum goods outside GST in the initial stage would mean that both the Centre and states will continue to levy their current taxes on these items — the former excise duty and the latter sales tax/VAT. In the absence of input tax credit, tax cascades will remain to a large extent till these products are brought into GST.

Entry taxes are likely to be kept within GST right from the start.

The Constitutional Bill to be introduced in the current session of Parliament is the first step towards replacing most of central and state taxes (except, in the main, the basic customs duty) with a comprehensive GST.

The Constitution (122ndAmendment) Bill is primarily aimed at allowing the Centre to tax sale of goods whereas it currently taxes manufacturing through excise duty, and states to tax services. Besides, it seeks to empower the proposed GST council to decide all operative aspects of indirect taxes including which of the extant taxes should collapse into GST, the items to be included/exempted, determination and review of tax rates. The council will also recommend the way the Centre’s share of taxes on inter-state trade should be shared, whether any special rate of GST should be levied on certain items for a specified period and the way forward for the excise duty exemptions given to businesses in Northeastern states, Jammu and Kashmir, Himachal Pradesh and Uttarakhand.