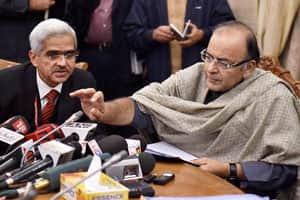 Calling it the “biggest tax reform since 1947”, finance minister Arun Jaitley on Friday introduced the Constitution (122nd Amendment) Bill, 2014, in the Lok Sabha to facilitate the introduction of proposed Goods and Services Tax (GST).

The Bill, which is a result of a series of hectic-negotiations with the empowered committee of state finance ministers, proposes to include petroleum and octroi in the GST while providing for a five-year compensation for any possible revenue loss arising due to the implementation of the new indirect tax regime.

Though under its ambit, the petroleum products would not be subject to the levy of GST till the GST Council decides. In the interim, both the Centre and states would continue to impose their respective tax on petroleum products.

Earlier, the Centre had proposed including the petroleum products in the GST with zero rate while allowing states to levy the VAT or CST. The earlier proposal allowed the industry to take input tax credit, something which will not be possible under the current proposal.

Further, giving in to the demands of BJP-ruled states like Gujarat and Maharashtra, the Centre has further sweetened the deal for such manufacturing states by allowing them an additional levy of one per cent on supply of goods in inter-state trade for two years which can be extended further if the GST Council, proposed in the Bill, decides.
Tabling the Bill, Jaitley said that the Centre has ensured that the rights of the states are preserved while “no state is a loser”.

“We have made sure that no state will lose a rupee of revenue … Service tax is entirely in the domain of the Centre today. It is going to be shared with states now. Places like Maharashtra, from where one-third of the national service tax comes, will benefit. When we share it with them, it more than takes care of the octroi absorption into the GST. Service tax in Karnataka takes care more than that. Additionally, we will make sure that for two years a one per cent additional tax is permitted to states,” the finance minister said, adding that the government is aiming at a roll out date of April 1, 2016.

However, tax experts said that though welcome, the structure of the Bill is riddled with “intrinsic conflicts”.

“The 1 per cent additional levy is distortionary. It is for origin or manufacturing states while the GST as such is a destination-based tax. Centre has gone too far to get states on board. It has travelled more than half way to bring them,” Harishanker Subramaniam, national leader, indirect tax, EY, said.

The new tax regime seeks to ensure seamless transfer of goods and services across the country by removing the cascading effect of several state and central levies. Taxes including excise duty, services tax, VAT, CST, entertainment tax, purchase tax, and luxury tax among others will be subsumed in the new indirect tax.

The Bill, which is likely to be taken up for discussion in the Budget session, is vital for the roll out of GST as it empowers the Centre to tax beyond the factory gate while allowing states to tax services as well, hitherto in the Centre’s domain. For its passage, the Bill needs two-thirds majority in both the Houses and ratification by 50 per cent states’ legislatures. The UPA government had tabled the Constitution Amendment Bill in 2011 that was later sent to parliamentary standing committee on finance for vetting. However, owing to lack of consensus, the previous government could not get it passed.

* The Bill proposes to give states a five-year compensation timeline for revenue losses: 100% for the first three years, 75% for the fourth year and 50% for fifth year
* Central and state GST will be decided by the GST Council
* Petroleum products, though part of the Bill, will not be subject to GST until the GST council decides
* States with manufacturing activity will get additional 1% on inter-state trade for two years
* Bill makes provision for a narrow tax band over and above floor rates for Central and state GST