Prime Minister Narendra Modi in his ‘Mann ki Baat’ radio address said that his government is committed to implement the One Rank, One Pension (OROP) scheme for ex-servicemen, but sought time to resolve its complexities. 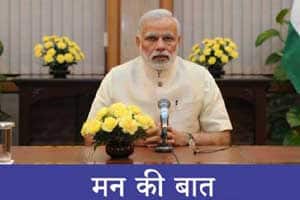 Vowing to address the “vexed” issue of ‘one-rank, one pension’ (OROP), Prime Minister Narendra Modi today asked the ex-servicemen to give him some time as he targeted the previous governments, saying they had only “played” with the sentiments of the armed forces for 40 years without doing anything on the matter.

He attacked those indulging in politics over the matter and said “problems” have been added to the issue over the years and effort was underway to simplify it and make it acceptable to all.

In his monthly ‘Mann Ki Baat’ programme on radio, Modi said he has directed various departments in the government to look for solutions to the issue.

“For 40 years, you have been patient. Give me some time. Allow me to work on this. We will together find a solution to the problems,” he told the ex-servicemen who are agitated over the delay in implementation of OROP.

“I want to tell one thing, not as the Prime Minister but as a human being with full sincerity, especially to the soldiers who are engaged in protecting the country as well as those who have retired from the armed forces and those who have made sacrifices.

“I assure you. I have made a promise in the midst of ex-servicemen that my government will implement one-rank, one pension. We do not shun our responsibility,” he said, adding that soon after his government was formed, various departments have been working on this.

Modi said the issue is not as simple as he had thought but much more “vexed” as “problems” have been added to it over the years.

Apparently referring to the impatience that is being exhibited on the OROP issue, the Prime Minister said “there is no need to give step-by-step information to the media. There can be no running commentary on this.”

He repeatedly assured the ex-servicemen that “this government” will resolve the one-rank, one-pension issue.

“You (armed forces) have importance in the ideology from which we have come and the principles on which we are moving ahead. For me, to help you (armed forces), is not any government programme or political agenda, but a matter of service to the nation,” Modi said.

He said those trying to get political mileage out of the issue have been “playing with you” for 40 years. “That path is not acceptable to me and neither do I want to take any such step which will complicate the issue. You keep faith in me.

“Rest, those who want to rake up the issue, do politics over it, let them do. I am determined to do whatever I can for those who are ready to die for the country. I am confident that my ‘Mann ki Baat’, which has only been sincerity, will reach you,” he said.

During the 25-minute programme, the Prime Minister also referred to the completion of one year of his government and said there have been analyses and “criticism” while “many gave distinction to us”.

“In a democracy, this ‘manthan’ (debate) is necessary. Views, for and against, are important. It is very essential to know what was lacking. The good things have their own benefits,” he said.

Contending that he feels for the poor, Modi specially mentioned three recently-launched social security schemes, including PM Insurance Scheme and Atal Pension Scheme, for the benefit of the downtrodden people.

He said these schemes had become a hit within 20 days as 8.52 crore people had enrolled for them.

“I feel for the poor … These schemes are a very important step for their social security. … These will ensure that the poor are not dependent on anybody and are empowered,” he said.

“I want to create an army from among the poor to fight poverty and defeat it so that the burden of poverty that the nation is carrying for years is removed. For ridding the nation of poverty, we will continue to make efforts and succeed,” he said.

Talking about the ‘Kisan TV channel’ launched recently, the Prime Minister said it will help the farmers as well as fishermen to learn the best practices and improve productivity.

In this context, he emphasized the need for better nurturing of milk-bearing animals to improve production as he observed that India was far behind in terms of milk production per animal. He pressed for use of scientific technology in this regard.

Modi also mentioned about June 21 which is being celebrated as the International Yoga Day and asked Indians, within the country and abroad, to participate enthusiastically to make it a success.

He said the declaration of June 21 as International Yoga Day by the United Nations is a matter of pride for every Indian. Yoga, besides helping the body and soul, can be a catalyst to unite the world and help remove tensions.

He also talked about the heat wave that has gripped the nation and asked people to take care of themselves as well as animals and birds.

The just-declared results of board examinations were also mentioned by the Prime Minister who gave a pep talk to the students, asking those who failed not to be disheartened but take it as an opportunity to do better in life.

In this context, he cited the example of renowned scientist and former President A P J Abdul Kalam, saying he had written in his book that he wanted to be a pilot but failed in the test for it.

“There is ray of hope even in failure,” Modi said, highlighting how Kalam, after failing to be a pilot, became such a famous scientist and then the President of India.

He also asked parents of those students who had failed not to treat it as the end of the world and support them.

More Stories on
Narendra Modi
One Rank One Pension