Government may soon announce launch of two expressway projects – Delhi-Amritsar-Katra and Delhi-Jaipur that will significantly reduce the travel time to Katra and Jaipur from the national capital. 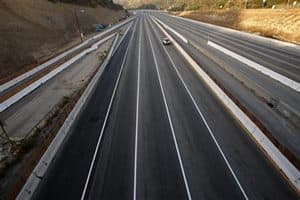 The new link road will be approximately 16 km long, starting (from Sahibganj Pass in Jharkhand) to another six-km stretch near Narenpur (junction of NH-133B and NH-131A on Manihari bypass in Bihar). This stretch also includes a four-lane bridge on the Ganga. (Representative Image: Reuters)

Government may soon announce launch of two expressway projects – Delhi-Amritsar-Katra and Delhi-Jaipur that will significantly reduce the travel time to Katra and Jaipur from the national capital.

“In principle approval was granted for launch of two greenfield projects – Delhi-Amritsar-Katra and Delhi-Jaipur was taken in a meeting chaired by Road Transport and Highways Minister Nitin Gadkari, which among others was also attended by Deputy Chief Minister Punjab, Sukhbir Badal, Haryana Chief Minister Manohar Lal and Union Steel Minister Birendra Singh,” an official told PTI.

The Delhi-Katra distance will reduce to 572 km from the present 727 km after completion of the Delhi-Amritsar-Katra project which will pass via Jind in Haryana, the official said.

Also another greenfield project Delhi-Jaipur via Pataudi was also discussed in the meeting and it was that both the projects will result in new avenues of development in the concerned states.

Last month, Gadkari had said that government would soon launch three expressway projects — Delhi-Amritsar-Katra, Delhi-Jaipur and Vadodara-Mumbai — at a cost of about Rs 1,32,000 crore.

As per the plan, after completion of the Rs 60,000-crore Amritsar-Delhi expressway, travel time will reduce by over two hours.

Also on the anvil is a project connecting Jalandhar to Ajmer that will bring down the travel time to five hours.

Meetings in this regard are also scheduled with chief ministers of Jammu & Kashmir, Punjab, Haryana, Delhi and Rajasthan.