Give autonomy to Indian Railways, govt should only frame policy: Panel

Railways should be given autonomy with the government having the role of only framing policy, according to recommendations… 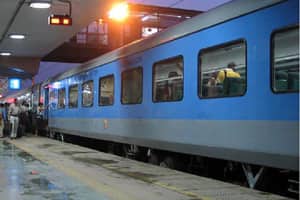 Indian Railways should be given autonomy with the government having the role of only framing policy, according to recommendations of a high-level committee which favours complete overhaul of the national transporter within a period of seven years.

The committee, chaired by NITI Aayog member Bibek Debroy, has also said that railways should be divided into two independent organizations one responsible for track and infrastructure and another to operate trains.

Railways should focus on its core activities to improve its efficiency and compete with the private sector, it said.

As part of recommendations, the panel has said that railways needs to be overhauled within seven years.

As part of restructuring, it suggests, the government should be responsible only for the rail sector policy. This will give autonomy to railways and encourage private investment, the panel said in the 323-page interim report.

On the issue of FDI, the report said foreign money isn’t going to come in the present circumstances and it will come only if the Railway sector is reformed with the change in incentives and structure.

The report said that private investments will come “only if there is an independent umpire, a regulator, responsible for ensuring fair and open access and for setting access charges on the rail track.”

It has said railways should be divided into two independent organizations one responsible for track and infrastructure and another that will operate trains.

The Committee has suggested that Railways should focus on core activities to efficiently compete with the private sector. It should distance itself from non-core activities, such as running a police force, schools, hospitals and production and construction units.

It has proposed that a railway infrastructure company be set up as a government special purpose vehicle with a possibility of disinvesting in the future.

Debroy panel has argued that investment in railways has a massive multiplier effect in the Indian economy and it has been increasing over time, and the effect is greatest on the manufacturing sector.

It has said that suburban services should be separated and run as joint ventures with state and local governments, with tariff determination by state governments.