India’s GDP can expand by a whopping 27 per cent if the number of female workers increases to the same level as that of men, International Monetary Fund’s chief Christine Lagarde… 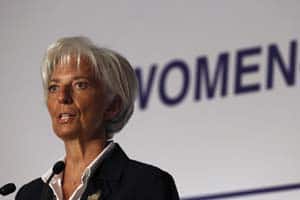 India’s GDP can expand by a whopping 27 per cent if the number of female workers increases to the same level as that of men, International Monetary Fund’s chief Christine Lagarde said today.

This is much higher than the positive impact a 50-50 gender parity in workforce can have on the economies of the US and Japan at 5 per cent and 9 per cent respectively.

Speaking at the launch of W20, a grouping of women leaders from the world’s 20 largest economies including India, Lagarde said that “it is an absolute economic no-brainer” that empowering women boosts economic growth.

“For example, we have estimates that, if the number of female workers were to increase to the same level as the number of men, GDP in the United States would expand by 5 per cent, by 9 per cent in Japan, and by 27 per cent in India,” Lagarde said in a written keynote speech she had prepared for the event.

“These estimates, while of course tentative, are significant and large enough to be taken seriously. This applies particularly to countries where potential growth is declining as the population is ageing,” she added.

While she could not read out the entire speech due to paucity of time, a copy of it was released later by IMF. Lagarde also said only big words should not matter for women and they must verify the delivery of the promises made for the women empowerment.

She also said that men have a key role to play in the empowerment of women and quoted Indian-origin Nobel laureate Amartya Sen as saying, “Women are increasingly seen, by men as well as women, as active agents of change — the dynamic promoters of social transformations that can alter the lives of both women and men.”

Referring to the G20 pledge of November 2014 to reduce the gap in women’s labour force participation by 25 per cent by 2025, Lagarde said this would have the benefit of creating an estimated 100 million new jobs for the global economy.

“That was The Promise of 2025. Today, I want to focus on how to deliver on that promise… By the latest estimate, there are more than three and half billion reasons why gender equity matters,” she said while adding that women’s empowerment is not just a fundamentally moral cause, it is also an absolute economic no-brainer.

“For Turkey, it has been estimated that gender parity in employment could increase per capita income by 22 per cent. The same kind of gains are also possible for many other countries,” she added.

According to Lagarde, greater gender equality not only raises absolute income, it also helps to reduce income inequality.

“A forthcoming paper by our staff examines this relationship by comparing a so-called Gender Inequality Index to measured income inequality. The results have been quite striking it suggests that a boost to education and employment chances for women could lead to improvements in income equality of a magnitude that historically took decades to achieve,” she said.

Listing out other benefits of female empowerment, Lagarde said it can reduce poverty.

She called for collective action to ensure that gender equality goals of 2025 are achieved and said IMF has also enhanced its focus on macroeconomic effects of gender gaps.

“This has included new research, for example, on women’s role in the economy and legal barriers to female participation. Perhaps even more importantly, we are now looking to apply this research in our policy advice to our member countries,” she said.

The IMF chief listed three key policy areas for women’s empowerment as the education, getting a job and having a family. She said that a number of countries with highly educated women still have low levels of female labour force participation.

Lagarde said further that the recent IMF research noted that almost 90 per cent of countries have at least one important legal restriction that makes it difficult for women to work.

“In half of the countries we studied, when gender equity was constitutionally granted, female labour force participation increased by at least 5 per cent over the following 5 years.”

She further said that women’s pay was another barrier, as women get just three-quarters of what men earn with the same level of education and in the same occupation.

“Infrastructure can be an obstacle too. Without access to basic transport or energy sources, women find it very difficult to work outside the home. In rural South Africa, for example, electrification increased female labour force participation by 9 per cent,” she said.

Lagarde also flagged unequal access to finance as a key impediment and said in emerging and developing countries, 70 per cent of female-owned small and medium-sized enterprises are either unserved or under-served by financial institutions.

“Increasing financial inclusion for women is an issue that I plan to emphasise at the UN Summit on the Post-2015 Development Agenda later this month. It is crucial to delivering on the 2025 objective,” she added.

Lagarde said the special role that women play in family life also comes in way of gender equality at workplace and suggested measures like paid parental leaves including paternity leaves as well as affordable and high-quality childcare facilities.

“This raises a salient point: men not only as partners, but also as fathers, sons, and brothers have an important stake in empowering women. Not only does this help their partners, daughters, mothers and sisters to achieve their potential, it also helps build a stronger society for all,” she said.

“Policymakers and employers can work hand-in-hand to provide affordable and high-quality childcare. Research suggests that cutting the cost of childcare by half could increase the number of young mothers in the labour market by 10 per cent.

“Tax reform can also help. In too many countries, the tax system discourages secondary earners who are often women from working. Replacing family taxation with individual taxation can reduce marginal taxes on these secondary earners, thereby encouraging women to work.

“This package of parental leave, childcare, and a fairer tax system can enable women to combine a job with a family. Along with investing in girls’ education and easing women’s entry into the labour market, it also supports women’s economic empowerment,” she added.

Lagarde said that the G20’s pledge to reduce the gap in women’s labour force participation by 25 per cent over the next decade holds the potential to empower women in a historic way.

“More than this, it holds the potential to boost growth, raise overall per capita income, tackle poverty, and reduce income inequality for people all over the world. In short, this can be a game-changer for the global economy. But the promise can only be fulfilled if words become actions.

“We need to work together the G-20, the W-20, the IMF’s 188 member countries to transform aspiration into reality,” she added.