From Mumbai shanties to 18-storey building: 255 families from Dharavi move into new homes

Families get keys to new 300 square feet homes in the only building ready under the much-delayed Dharavi redevelopment plan. 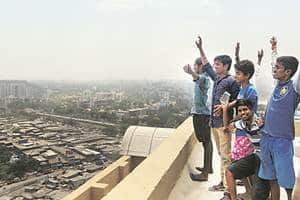 The erstwhile Congress-NCP government had started the construction of this building before the 2014 polls to show some movement in the Rs 25,000-crore project during its reign

After living for over two decades in his claustrophobic Dharavi shanty, 32-year-old Babu Mandipla had a childish grin plastered on his face as he took in the big windows and easy ventilation of what was now his own house. That too, in a Mumbai skyscraper. With his two hands firmly on his mother Padma’s shoulder, Mandipla said, “We really had no hope that we would actually get this house.”

Even as its overall plan of giving momentum to the decade-old Dharavi redevelopment plan is on shaky ground, the state government on Tuesday, in a low-profile function, moved a handful of residents to the only building ready under the much-delayed Dharavi redevelopment plan. The erstwhile Congress-NCP government had started the construction of this building before the 2014 polls to show some movement in the Rs 25,000-crore project during its reign.

The Maharashtra Housing and Area Development Authority (MHADA) handed over keys to new 300-sqft homes to 255 families from the neighbouring Shatabdi Nagar slum. The authority is in charge of redeveloping Sector 5, the easiest of Dharavi’s five sectors, while the other four are to be revamped with private developers on a public-private partnership model.

The authority gave possession of the new houses, each built at a cost of about Rs 22 lakh, with an old-fashioned ‘griha pravesh’ for every family, a rangoli drawn in front of all flats and red ribbons to cut. Every key handed out by MHADA was accompanied by sweets to celebrate the new beginning, and officials performed an ‘aarti’ as a welcome gesture every time a family entered its new home.

Soon after she collected the key to her first-floor house, 66-year-old Ratnamma sent her daughter to fetch her stove from their shanty, a stone’s throw from the new residence. The first thing that she did in her new home was to boil milk, make some food, and call her friends over.

“I will be a little sad to leave some of my friends in my slum behind. But it feels good. I will now know what it is to live in a building,” she said, sitting on the kitchen floor, with her friends surrounding her.

While the 18-storey building has 358 flats, only 266 of the 504 families that MHADA surveyed from the slum sprawl earmarked were found eligible for free housing under the Dharavi redevelopment scheme. Another 140 families have appealed against MHADA’s decision of declaring them ineligible. Of the 266, only 255 could take possession of their houses as seven were absent, two are dead and another two had not completed formalities.

Chandrakant Dange, joint chief officer of MHADA’s Mumbai board, said, “All the families who have taken possession will hand over their shanties to us within three days. MHADA has also arranged for vehicles to shift their belongings to the new building.”

Soon after, the authority hopes to demolish the entire slum and clear space for a new high-rise, giving all ineligible residents an affidavit that the authority will give them a free 300-sqft house in Dharavi if found eligible after their appeal, officials said.

The Dharavi slumdwellers who have taken possession of their new bright airy homes, however, form less than 0.5 per cent of the total residents of Asia’s largest slum sprawl, who the state government intends to rehabilitate in well-planned buildings with wide roads and open spaces.

For the rest, the prospect of a new permanent home is still a distant dream even 12 years after the scheme was first planned and individual slum rehabilitation schemes were stayed to avoid piecemeal development.

Residents of Sector 5 now pin their hopes on two new buildings that MHADA has started work on, and plans for four more under works.

For the other four sectors, the state government’s most recent attempt at bidding out the scheme drew a blank, with not even a single developer having come forward. The government is now biding time till Thursday, having extended the last date of submission to May 5, in the hope that potential bidders change their minds.