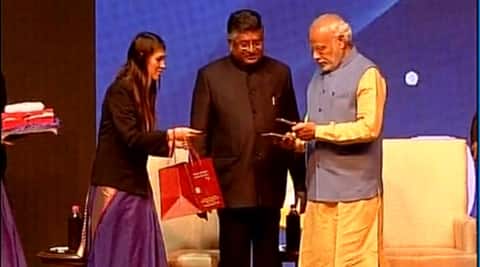 On the last day of the 50-day window provided by the government to citizens to exchange or deposit their old currency notes of Rs 500 and Rs 1000 denominations, PM Modi launched the new App at the ‘DigiDhan Mela’ programme at Talkatora Stadium in Delhi.

On the occasion, PM Modi awarded students who have made posters, songs and slogans to spread the message of digital payments to their families, schools. Village level entrepreneurs who have helped their fellow villagers move to digital payments were also awarded by the PM.

“Download it on a smartphone or on a feature phone. It is not necessary to have the internet for this app. In the next two weeks, one more work is being done, which will increase the power of BHIM so much that you would be able to withdraw money even with your fingerprints,” PM Modi said at the event.

The government is organising ‘DigiDhan Mela’ in 100 cities of the country over 100 days to promote digital payments and announce the winners of Lucky Grahak Yojana and Digi-Dhan Vyapar Yojana. Conceptualised by the Niti Aaayog, DigiDhan Melas will take place until March.

Taking a dig at people spreading apprehensions about government’s digital payments push, Modi said there is no dearth of people who live all the time with negativity and unhappiness. “Some people are still not happy. I have no medicine for such people. Let their negativity be welcome to them only,” he said.

Speaking on the occasion today, Niti Aayog CEO Amitabh Kant said, “It is only a matter of time before the entire country does digital. Even, India’s most tribal districts too have embraced digital payments with great flair.”

“India has shown that digital payments are not only for rich. Even the poorest are eagerly adapting to a less cash society for a clean India,” he added.

Next Story
In 2017, Centre must deliver govt services as a right, not make citizens run around, say senior IAS officers