For Shinzo Abe, its business in Delhi and spirituality in Varanasi

With bilateral talks and business meetings wrapped up in New Delhi earlier in the day, Japanese Prime Minister Shinzo Abe experienced a spiritual retreat on the banks of the holy Ganges river at the Dasaswamedh ghat here. 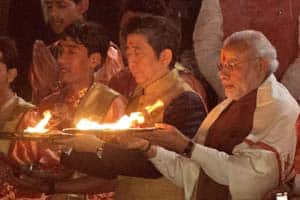 With bilateral talks and business meetings wrapped up in New Delhi earlier in the day, Japanese Prime Minister Shinzo Abe experienced a spiritual retreat on the banks of the holy Ganges river at the Dasaswamedh ghat here.

Shinzo Abe, accompanied by his Indian counterpart Narendra Modi, not only meticulously followed the rituals – Ganga pujan, aachman and sankalp, as described by priests, he also photographed from his personal cell phone the festivities and the Ganga aarti. In between he also chatted with Modi and enquired about the number of ghats and other holy activities in Kashi, an official present told IANS.

Dressed in a black trouser and shirt and a contrasting khaki waistcoat, the 61-year-old allowed the priests performing the Ganga pujan to smear his forehead with a vermilion and sandal-camphor mix paste and even tied a ‘kalawa’ (holy red thread) on his right wrist. The thread, he was told by eminent priest Chandramauli Upadhyaya, was auspicious and meant well for the person sporting it.

Earlier Abe arrived at the ghat accompanied by Modi amid unprecedented security as people on adjoining Rajendra Prasad ghat chanted “Har Har Mahadev” (Hail Lord Shiva) and welcomed the duo with applause and sloganeering. The visiting dignitary also made it a point to take off his shoes before performing the rituals. On some occasions, he even followed Modi’s lead when he proceeded with various ‘sanatan dharam’ rituals, which he probably has known through the years. The select lensmen, mostly from Japan, went into a frenzy as Abe and Modi performed the aarti in special brass tahlis.

Abe animatedly watched the Ganga aarti, performed a group of young men and women of the Ganga Sewa Sansthan. The Ganga aarti is performed at the ghat every evening. Abe also clapped as the aarti began with the blowing of conch shells and trumpets and was followed by chanting of hymns and singing of Sanskrit verses. Modi hummed along as the performers sang “Achyutam keshawan, Krishna Damodaram…”.

Abe even raised his hands in the air as ‘Har Har Mahadev’ was chanted at the end of the aarti. The visiting dignitary was presented a handmade sketch of Modi and Abe by a local artist.

The ghats had been specially decorated with marigolds flown in from Kolkata and lit up with earthen diyas and LED’s. People witnessing the high-profile event took pictures of Abe and Modi on their mobile phones.