Consequences of the coal block cancellations might also have to be grappled with in the coming months, even though the govt is making efforts to mitigate these by embarking on an efficient re-allocation process and assurance of linkage to companies that have created end-use capacities 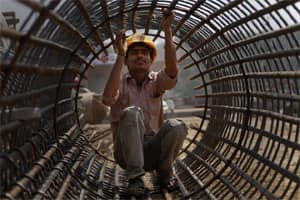 The economy beat bleak forecasts to grow a decent 5.3% in the July-September period from a year before, aided by government expenditure and a better-than-expected performance by the farm and allied sectors, the official data released on Friday showed. However, a zero expansion in capital formation in the last quarter reflected the extent of productivity loss the economy continues to suffer from, prompting analysts to renew their call for deeper structural reforms instead of incremental steps.

With the release of Friday’s data, many analysts tended to revise their growth projections for the full year to the upper limit of 5.5%, while the consensus previously seemed to hover around 5%, even as the government had budgeted for 5.7%.

However, given that fiscal deficit touched almost 90% of the full-year target by October, the government’s ability to pump in money and stir growth in the second half of this fiscal is limited. The forecast of a 7% drop in Kharif grain production is also expected to hurt the farm sector growth in the second half. But a relatively favourable base from the third quarter (the economy grew just 4.6% in each of the last two quarters of 2013-14) will provide some support, likely aiding the gross domestic product (GDP) to expand at 5.5% for the full fiscal, the same as the growth in the first half, said analysts.

Given the RBI’s resolve to break the back of inflation, there are doubts if it would cut the benchmark lending rate in its next monetary policy meeting on December 2, although the government has clearly been persuading it to trim rates to make capital less expensive to investors.
Having hit hard in the last fiscal, both the government and private final expenditure looked up this fiscal, recording a 5.8% and 10.1% expansion, respectively, in the second quarter from a year earlier. Community, social and personal services that includes a substantial government component grew at a healthy 9.6% against 9.1% in the previous quarter. Growth in trade, hotels, transport and communications inched up to 3.8% against 2.8% in the first quarter.

However, risks remain. Fixed investment — as gauged by the gross fixed capital formation data — barely grew in the second quarter, compared with a decent 7% in the July quarter and 3.1% a year before. The fact that most of the projects cleared by the government in recent months belong to the power sector, analysts argue that the shortage of raw materials and expensive credit may have stalled their actual take-off.
This may have got reflected in the latest power generation data, which showed growth in electricity, gas and water supply slowed to 8.7% in the second quarter, compared with 10.2% in the previous quarter. The consequences of the coal block cancellations by the apex court might also have to be grappled with in the coming months even though the government is making all efforts to mitigate these by embarking on an efficient re-allocation process and assurance of linkage to companies that have created end-use capacities.

“Data on the expenditure of the GDP reveal concerns, particularly the stagnation in investment activity and contraction in exports, with a double-digit expansion of government expenditure bolstering growth. Given the low rise in tax collections of the government, expenditure curtailment to ensure that fiscal targets are met could dampen GDP growth in the remainder of this fiscal,” said Aditi Nayar, senior economist at Icra. The impact of an expenditure squeeze will be steeper in the last quarter of the fiscal. The full-year growth is likely to print closer to the upper end of Icra’s forecast range of 5.3-5.5%, she added.

Crisil chief economist DK Joshi said the growth will be around 5.5% this fiscal, as favourable bases will somewhat compensate for the weakness in industrial output and the possible drop in farm production.

However, amid the cloudy forecast for the farm sector, accounting for 14% of GDP, the push from the usually laggard sector may not be enough to stir overall growth in the next two quarters. Farm and allied sectors’ growth was 5% in the second half of the last fiscal when overall GDP expansion was 4.6%.

With commodity prices coming down (brent prices have dropped over 35% this year), some analysts expect its benign impact on inflation to help consumption to recover. According to industrial production data, even in the build-up to the festival season, a 4% drop in consumer goods output in September— recording contraction in 15 out of 18 months since last April —  suggested persistent weakness in private demand.
Growth in mining and quarrying , which reported a decline for eight quarters before looking up in the first quarter of this fiscal, slowed to 1.9% in the second quarter, compared with 2.1% in the previous quarter. Among the services sectors, financial services disappointed with growth coming down to 9.5% during July-September, compared with 10.4% in the previous quarter. Manufacturing, too, grew at just 0.1% in Q2 even on a relatively conducive base (it grew just 1.3% a year before and compared with 3.2% in the June quarter this fiscal).