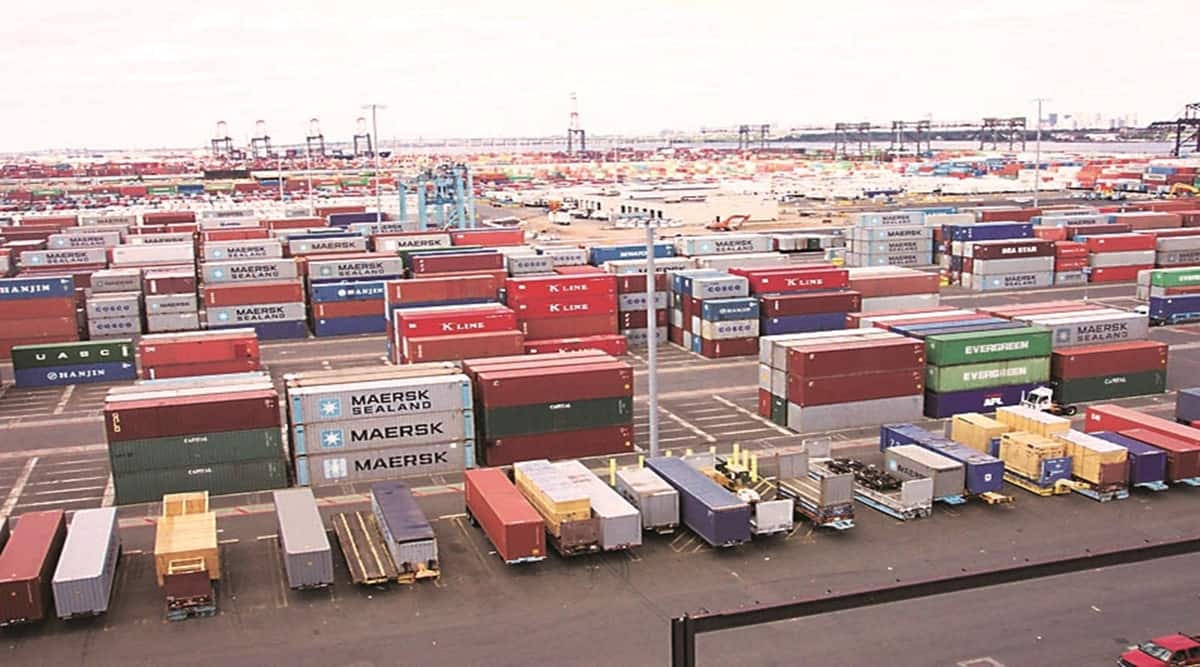 Merchandise exports hit $300 billion till December, a record for the first three quarters of any fiscal, having witnessed a rise of 48.9% from a year before and 25.8% from the pre-Covid (same period in FY20) level, and turned out to be a major growth engine for the economy, commerce and industry minister Piyush Goyal said on Monday.

Exports in December touched a monthly record of $37.3 billion, up 37% from a year earlier and 37.6% from the pre-pandemic level. However, the continued spurt in imports (purchases from overseas jumped 38% on year to $59.3 billion) kept trade deficit in December at an elevated level of $22 billion, down marginally from $22.9 billion in the previous month. While the rise in imports signals improving domestic demand following a Covid-induced compression last fiscal, it will also pressure current account deficit (CAD).

Goyal exuded confidence that the country will realise its lofty goods exports targets of $400 billion despite potential short-term risks to the global supply-chain from the new Covid-19 strain, against $291 billion in FY21. An industrial resurgence in advanced economies, global commodity price rise, pledge to clear all past dues owed to exporters and official support to ease a liquidity crunch have bolstered exports this fiscal, analysts have said.

Importantly, merchandise exports had remained below par in the past decade, having fluctuated between $250 billion and $330 billion a year since FY11; the highest export of $330 billion was achieved in FY19. So, a sustained surge in exports for a few years will be crucial to India recapturing its lost market share.

Goyal said services exports, too, are estimated to have risen by 19.1% year-on-year to $178.8 billion until December this fiscal, despite Covid-induced curbs on travel and tourism across the globe. Such exports rose 11.7% from the pre-pandemic period.

Stressing the potential of free trade agreements (FTAs) in contributing to sustained export growth momentum in future, the minister said an FTA with the UAE, India’s third-largest export destination, is close to finalisation. An interim trade deal with Australia, which will cover key labour-intensive sectors like textiles, pharmaceuticals, footwears, leather and agriculture, is at a very advanced stage of conclusion, he said. This is to be followed up with a broader FTA with Australia. Negotiations for another FTA with the UK will likely be launched this month and an early-harvest deal could be finalised by March 2022, Goyal said.

Official data showed core exports (excluding petroleum and gems and jewellery) in December stood at $28.7 billion, up 28.6% from a year before and 36.2% from the pre-Covid period. Similarly, such imports rose 34.7% on -year in December to $35.6 billion and 47.8% from the pre-pandemic level.

Of course, headline imports were driven partly by a spill-over of pent-up domestic demand that remained mostly muted in the wake of the pandemic. But import bill was greatly inflated by elevated global crude oil prices and massive purchases of coal, cooking oil and gold.

Exports this fiscal have been supported by strong order flow from key markets such as the US and China.

The top ten commodities–such as engineering goods, petroleum products, gems & jewellery, organic & inorganic chemicals, drugs & pharmaceuticals, electronics, garments, cotton yarn/fabrics/made-ups, handloom products etc., plastic & linoleum and rice–made up for about 80% of the exports in December and recorded a 41% rise from a year before. “Many of them were labour-intensive sectors that contributed majorly to the exports basket, which itself is a good sign, further helping job creation in the country,” said A Sakthivel, president of the exporters’ body, FIEO.