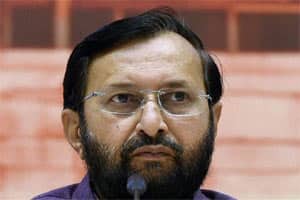 Under Swachh Vidyalaya initiative, 4,17,796 toilets were constructed in 2,61,400 elementary and secondary government schools between August 2014 and August 2015, thus ensuring that every government school has separate functional toilets for girls and boys, he said during Question Hour. (PTI)

Days after Manmohan Singh was questioned by CBI, Union Minister Prakash Javadekar today said the former prime minister cannot shy away from responsibility as he was the coal minister when the scam took place.

Javadekar, one of those who had first raised allegations regarding the coal scam, however, said it was Congress which should take the blame in the matter as it had made Singh, “a gentleman”, sign all the “bad” deals.

“The issue is very simple that he (Singh) was the coal minister when this scam took place. Nobody has charged Singh with corruption, but definitely he was the signatory for all the illegal allocations.

“All the bad allocations were signed by him and this is what Congress did to him (Singh),” Javadekar said in response to allegations by Congress that the BJP-led government was pursuing a political vendetta against its leaders.

“Actually, the vendetta was by Congress against Manmohan Singh,” Javadekar said, adding, “We always think that Singh is a gentleman but the issue is you (Congress) made him sign all the bad deals… So, Congress has actually to apologise to the nation.

“That is the case and, therefore, the then prime minister cannot shy away from responsibility. I think due process was followed and Congress should take the blame and apologise.”

A team of CBI officials examined the former prime minister at his residence three days back, before a January 27 deadline for the agency to submit a status report with a special CBI court.

Singh’s examination was in connection with a coal scam case relating to the allocation of Talabira-II block to Hindalco when he was also holding the coal portfolio, and in pursuance of the court’s December 16 order.

Meanwhile, the government has also refuted reported claims by some Congress leaders that the questioning of Singh was a “vindictive” act on its part.