Many politicians promise free electricity but “political economy” is not going to take the country forward as it needs to, the Chief Economic Adviser… 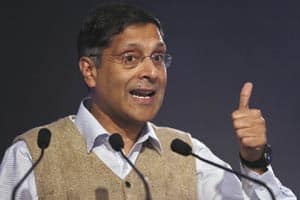 Many politicians promise free electricity but “political economy” is not going to take the country forward as it needs to, the Chief Economic Adviser to Prime Minister Narendra Modi today said while suggesting the need for “a conversation on pricing of energy”.

Arvind Subramanian, who was speaking at an event organised by Centre for Science and Environment (CSE), said that energy was “underpriced” in the country but at the same emphasised that he was not suggesting that there should be no subsidies at all and noted that energy needs of the people are paramount.

The Prime Minister too had recently questioned the promises of free power that political parties make, in an apparent dig at Aam Aadmi Party over its poll pledge to reduce power bills in Delhi.

“We don’t talk about the elephant in the room where energy is massively underpriced. And we know that many, many politicians, when they come to power, the first thing they promise is free power.

“And that is not a political economy that is going to help us move forward as rapidly as we need to…. So I think we need to have a conversation about how we price energy,” Subramanian said.

The eminent economist, however, added that he was “not saying that we should eliminate subsidies for the poor at all” and added that “we just don’t have a conversation on how to best price energy”.

“We completely underprice energy….and don’t get me wrong here. I am not someone who will say that some people should not have cheap and subsidised access to energy,” Subramanian added.

He said that it should be kept in mind that India is a very low per capita energy consuming country and added that the energy needs of the people are paramount.

Just days ago, Modi had wondered how promises such as free power could be made by political parties in states which are dependent on electricity supply from outside.

“During every election, political parties promise free power…People need to think about these promises,” Modi had said.

Subramanian made these comments at an event where CSE released its ‘Green’ Ratings of Coal Based Thermal Power sector. Environment and Forests Secretary Ashok Lavasa and eminent scientist M S Swaminathan were also present.

Lavasa said while the country treads the path to provide electricity to everyone, it should also be realised that depending too much on coal would have implications related to environment.

He said he felt that the power sector in India should be looked in complete perspective.

He said to ensure clean energy, it is not just that norms have to be met, but an attempt should be made to surpass them.

He also said that regulations cannot only be imposed by an army of inspectors but by self regulation and responsible enforcement which companies as part of their policy should adhere to.