India and Qatar are expected to give a fresh push to their economic ties, particularly in the hydrocarbon sector, when Prime Minister Narendra Modi… 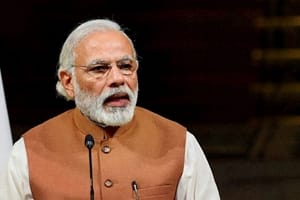 "No less than the prime minister said that Rs.15,000 crore was saved by plugging LPG subsidies and leaks but some media reports have suggested that only Rs.143 crore was saved from cash transfers and subsidies for LPG (liquefied petroleum gas) in over two years," the Congress leader said.

India and Qatar are expected to give a fresh push to their economic ties, particularly in the hydrocarbon sector, when Prime Minister Narendra Modi holds talks with this energy-rich country’s leadership tomorrow amid his keenness to attract investments for development back home.

Narendra Modi will also address top business leaders of Qatar, a country which is India’s largest supplier of LNG requirements, accounting for 65 per cent of its total imports last financial year.

During the interaction with the business community tomorrow morning, the Prime Minister is likely to seek greater investments, particularly in the infrastructure sector.

He will then hold detailed talks with Emir of Qatar Sheikh Tamim bin Hamad Al-Thani on a range of bilateral issues as well as regional and international matters of mutual concern.

The discussions are expected to focus on energy but various other aspects of the relationship will also come up during the talks, sources said here today.

Both sides are expected to sign a few agreements.

Qatar is an important trading partner for India in the Gulf region with bilateral trade in 2014-15 exceeding USD 15 billion. It is also one of India’s key sources of crude oil.

At present, a number of Indian companies are involved in construction activities related to the FIFA World Cup being hosted by Qatar in 2022.

Modi, who is visiting Doha from today for a two-day trip, will also address the Indian workers at a labour camp here. The Indian diaspora of over 6,30,000 form the largest expatriate community in Qatar and constitutes a substantial percentage of the country’s population.

The Prime Minister has been focusing on improving ties with the Gulf region which is crucial for India’s energy security. He has already visited United Arab Emirates and Saudi Arabia.

From here, the Prime Minister will travel to Switzerland on way to the US.