Finance Minister Arun Jaitley today said policymakers need to change their regulatory mindset asserting that role of state should be minimised and government monopoly must end wherever possible. 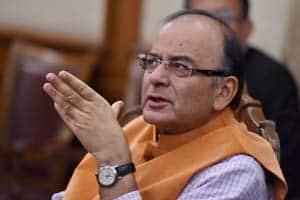 Finance Minister Arun Jaitley today said policymakers need to change their regulatory mindset asserting that role of state should be minimised and government monopoly must end wherever possible.

Speaking at the National Workshop on Citizen-Centric Governance, he said the economic reforms, which seek to promote easing of doing business, will continue as these are “never-ending processes and do not have a finishing line”.

Jaitley said policymakers in India still have a “regulatory mindset” which needs to change even as he spoke of the urgency for policing reforms to make police-citizen interaction more civilised.

“There are many ways of doing this. As far as processes are concerned, every department has to take simplification exercise and particularly those departments which have the interface with the public,” he said.

Jaitley mentioned that the use of technology has helped in improving the system of filing income tax returns and expeditiously providing refunds.

“Ease of doing business means providing a better regime than neighbours and tax rates which are globally competitive,” he said, adding that the government intended to reduce corporate tax to 25 per cent from 30 per cent in the next four years and do away with “most of the tax exemptions”.

With liberalisation of economy in 1991, Jaitley said India has gradually transformed from shortages to surpluses post reforms.

“We have surplus sugar, wheat, rice, cotton. We are even surplus in power now,” he said.

Now there is a need to find alternative model for managing surpluses, he said.

“I think dismantling the role of state made us better off. It gave plurality of choice. It encouraged competition and investment,” he added.

The Finance Minister said that every department must take up a simplification exercise especially the departments having a greater public interface.

The time between the decision of investment and the action of investment should be reduced to promote industries, he said, adding that the government is working in that direction by simplifying various procedures.

Many of the obsolete rules are being done away with so that quicker permission can be granted, he added.

Speaking at the occasion, Minister of State (Independent Charge) PMO, Personnel, Public Grievances, Pensions, Atomic Energy and Space, Jitendra Singh said the existing trust deficit between the citizens and the government has to be overcome to inculcate a mind-set compatible with simplification of procedures and engaged governance.