Speaking on corporate social responsibility, Nooyi said ESG has to be brought into the centre of companies and seen as a way to de-risk companies. 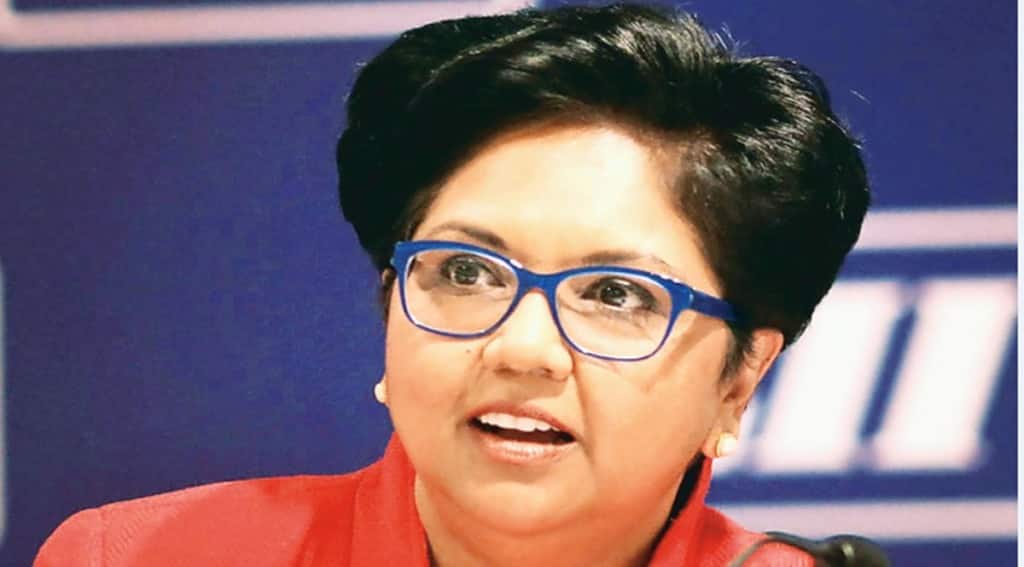 Population expansion in Asia and Africa, the resultant growth in consumption of proteins and epidemics, climate change, ageing population in rest of the world, and ‘dizzying pace’ of technological advancements are the five mega trends the world will see, according to Indra Nooyi, former chairperson and CEO of PepsiCo.

“Over the next decade or two you’re going to see much bigger growth in population in Asia and Africa than the rest of the world. So if the world is going to be over 9 billion people by 2030-2035, over 7 billion are going to be in Asia and Africa. But if you look at the percentage of GDP, it’s going to be mismatched. So we have to really worry about Asia and Africa not just growing in population, but also how do we increase the wealth, how are those regions going to increase their wealth because otherwise it will lead to a massive global inequity,” she said, speaking at The Indian Express e-Adda on Thursday.

She added that with the growing population, higher protein consumption and more rearing of animals could result in more epidemics and pandemics “as viruses jump from animals to human beings”, and called for public health systems to be ready.

Nooyi spoke about the ‘massive’ impact of climate change through issues such as scarcity of water that would first affect Asia and Africa, and then flow to the rest of the world. She flagged the ageing population across the world in absence of structural support for women in the workforce. “Women are wanting to rise up in the workforce and are being held back. But if you have an ageing population and you don’t create support structures for women to work, you won’t be able to take care of the ageing population. So we have a big mega trend that’s worrying me,” Nooyi said.

Speaking on corporate social responsibility, Nooyi said ESG has to be brought into the centre of companies and seen as a way to de-risk companies.

“…every ESG metric should be looked at through the eyes of, does it create shareholder value by de-risking the company, and not adding cost to it in the future,” Nooyi said, citing the example of moves by PepsiCo to shift its product portfolio to include more better-for-you products and reduce plastic use.
Nooyi said ‘fun for you’ products were attracting high taxes and she thought it was key to invest in healthy products to keep the company growing. Nooyi also said expectations that governments would at some point ask companies to pay for plastic use motivated a move to reduce plastic use.

She said such moves also help attract the best talent to companies and help them feel good about joining such companies.

Nooyi noted that ESG efforts should be related to the operations of the company and to drive shareholder value and not be “a fringe project that somebody dreamed up just to feel good or do good”.

She said India has to decide which sectors it wants to open to foreign direct investment (FDI) and provide policy certainty, as investors are frustrated with sudden changes in rules. In recent years, the Centre has tightened FDI rules in the e-commerce space, and also amended rules to require prior government approval for any FDI from countries sharing land borders with India.

“…like most countries, India has to worry about self-reliance of critical things for India and figure out which sectors are going to be open to FDI. What India cannot do is invite FDI and then overnight change the rules. Many investors I talked to get frustrated by that,” Nooyi said.