In order to cut imports from China, the domestic industry also wants strict adherence to Bureau of Indian Standards mark on tyre products, especially those made by Chinese companies. 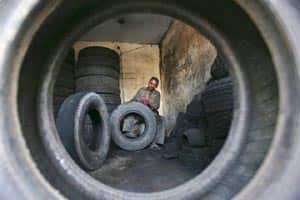 The ongoing and recently concluded investments in tyre manufacturing in India by domestic and multinationals are to the tune of Rs 36,000 crore. (Reuters)

Ahead of the Budget, domestic tyre manufacturers have called for imposition of anti-dumping duty and hiking of customs duty on cheap bus and truck radials from China, saying existing investments in the sector have been seriously threatened.

In order to cut imports from China, the domestic industry also wants strict adherence to Bureau of Indian Standards mark on tyre products, especially those made by Chinese companies.

“In view of the unhindered growth of cheap imports, the future investments in tyre manufacturing will be discouraged. While India is seeking new investments, existing and ongoing investments are seriously threatened in view of dumping tyres in the country,” Automotive Tyre Manufacturers’ Association (ATMS) said in a paper.

According to the paper titled ‘Should Indian Truck and Bus tyre manufacturing be held hostage to indiscriminate Chinese imports?’, measures like imposition of anti-dumping duty and increase in customs duty on tyres to 30 per cent is necessary to safeguard the domestic industry.

The ongoing and recently concluded investments in tyre manufacturing in India by domestic and multinationals are to the tune of Rs 36,000 crore.

Commenting on the issue, ATMS Chairman Raghupati Singhania said: “As the present government sharpens focus on manufacturing, sadly enough, tyre industry is grappling with a pernicious challenge that has the potential to not only undermine Make in India but also make the industry unviable with the onslaught of cheap imports and dumping from China.”

The paper said “anti-dumping duty needs to be imposed on truck and bus radial tyres from China on top priority. Besides, BIS needs to be strictly adhered to.”

Moreover, free trade agreements (FTAs) need to be revisited so that tyres and natural rubber are accorded the same treatment, it added.

“As a corrective measure, customs duty on tyres need to be increased from 10 per cent to 30 per cent with a view to correct inverted duty between tyres and natural rubber,” it said.

Currently, India offers a ready and growing market with very low import tariffs on tyres. As against basic import duty of 10 per cent, tyres can be imported at much lower duties under various trade agreements.

On the other hand, Chinese government continues to provide multiple direct and indirect subsidies to push exports. Therefore, import prices from China continue to be much lower than from other countries.

Besides, huge surplus capacities in China are abetting dumping of tyres in India, the paper said.