In a fresh setback, industrial production saw the sharpest contraction in three years of 4.2 per cent in October… 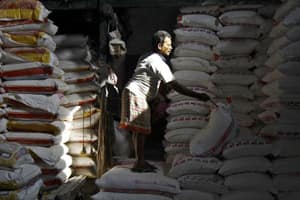 In a fresh setback, industrial production saw the sharpest contraction in three years of 4.2 per cent in October, though retail inflation dipped to 4.3 per cent, putting pressure on RBI to cut rate to boost growth.

Factory output as measured by Index of Industrial Production (IIP) declined due to contraction in manufacturing, capital goods and consumer items.

“It not only reflects slowdown in investments but also the deep rooted slackness in consumer demand which requires bringing down the interest rates urgently,” said Ficci President Sidharth Birla while commenting on IIP data.

“It would also need faster implementation of government’s intentions to introduce reforms in which states have major role to play,” he added.

The factory output for the month under review was the lowest since October, 2011 when it had recorded a contraction of 4.74 per cent.

IIP had declined by 1.2 per cent in October last year. For September, it was revised to 2.8 per cent from the provisional estimates of 2.5 per cent released last month, according to the official data.

For the April-October period, IIP is up 1.9 per cent, as against 0.2 per cent in same period of last fiscal.

The production of capital goods, a barometer of demand, declined by 2.3 per cent in October, as against a growth of 2.5 per cent in same month of last year.

For the April-October period, capital goods output is up 4.8 per cent, as against a dip of 0.2 per cent a year ago.

Meanwhile, according to the Consumer Price Index data, cheaper food items helped retail inflation drop to a new low of 4.38 per cent in November — the fifth consecutive month of decline.

As per the IIP data, consumer goods output too contracted by 18.6 per cent in October as against a decline of 5 per cent logged a year ago.

For the April-October period, the segment showed a contraction of 6.3 per cent, compared to a decline of 1.7 per cent in the same period of 2013-14.

Overall, 16 of the 22 industry groups in manufacturing showed negative growth in October.

As for the retail inflation, this is the lowest level CPI- based rate of price rise since the government started computing the new series of data in January 2012.

The food inflation also came down to 3.14 per cent in November as against 5.59 per cent in the previous month.