Rahul Khullar said decision concerning digital India expansion was political in nature and govt must wake up to the reality. 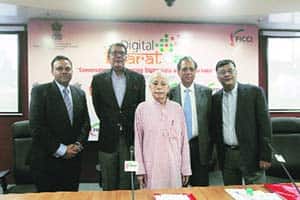 Telecom Regulatory Authority of India (Trai) chairman Rahul Khullar on Friday termed as unrealistic the government’s target to connect 2.5 lakh villages with broadband by March 2016 under the National Optic Fibre Network project. He also criticised the reliance on the public sector to implement the project and said the government should involve the private sector as well. He said it is a question of choice for the government as to how it spends its limited resources — on providing drinking water, education, electricity or broadband. Since the private sector is capable of expanding broadband, ideally, the government should focus on providing drinking water, electricity and education with its limited resources.

“We must look at the telecom industry for developing technology and access to broadband,” he said. “Where do I spend my dollar? Do I spend it on rural health, drinking water, education? You need to prioritise.”

Speaking at Digital Bharat 2015 seminar organised by Ficci with the support of the department of telecommunications (DoT) and The Financial Express, Khullar said the decision concerning digital India expansion was political in nature and the government must wake up to the reality and do a postmortem of the decisions taken in this regard.

He said the huge corpus under Universal Services Obligation Fund, which is collected from telcos to fund rural connectivity, is not used judiciously. “Though the fund under USO is primarily a budgetary support, you cannot spend it as you need. To secure the fund, you have to go through different departments in the government and that is how the projects start getting delayed. How can this work?” Khullar asked.