The government has recently reversed its earlier plan to develop and improve efficacy at four airports on public-private partnership basis. Given the flip-flops in government policy over the airport privatisation and airport tariff regulation programmes, industry experts have raised concerns over capital inflow into the sector. 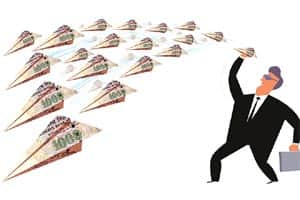 The government’s latest decision to shelve a proposal to develop and improve efficacy at four airports at Chennai, Kolkata, Jaipur and Ahmedabad on public-private partnership (PPP) basis and instead opt for awarding operations and maintenance (O&M) contracts to private sector entities only at two airports in Jaipur and Ahmedabad is being questioned on several fronts.

For one, air traffic in India is projected to triple to 570 million passengers by 2025 from the current 190 million. As per data available with aviation advisory firm Centre for Asia Pacific Aviation (CAPA), investments to the tune of $40-50 billion are required to be made to expand/upgrade airport infrastructure across the country to meet the demands for excess capacity arising from the estimated traffic projections. Given the flip-flops in government policy over the airport privatisation and airport tariff regulation programmes, industry experts have raised concerns over capital inflow into the sector.

“We need strategic clarity regarding privatisation, for both brownfield and greenfield (airports), and on economic regulation as this will impact flow of capital into the sector and could determine the level of capacity available over next 10 years. As things stand today, CAPA sees India heading for a serious capacity challenges in next 10 years which will start manifesting in next 3-5 years,” said Kapil Kaul, chief executive officer, CAPA.

Secondly, while certain sections within the Airports Authority of India (AAI) has alleged that the privatisation programme is a “real estate play” and is not in the interest of the public sector which has invested substantially (Rs 5,100 crore) to upgrade the airports in Kolkata and Chennai, industry experts have claimed airport operations is a commercial activity, leasing out airports to private sector would result in more efficient airports, greater competition, higher exploitation of the non-aeronautical assets and consequently lower airport charges per passenger.

Amber Dubey, partner and head (aerospace and defence) at global consultancy KPMG said, “Some critics of privatisation argue that since AAI has already done the capital expenditure, why do we need the private sector? They conveniently forget that building an asset is one thing, operating the same to world-class standards is a completely different competency. There’s no competition between different AAI airports for airline traffic since they are all part of the same balance sheet. It is difficult for AAI officials to maximise non-aeronautical revenue through innovative strategies since they are always worried of being victimised later for some wrongdoing — real or imagined.”

Dubey said the high revenue that AAI earned from airport PPP could have been used to develop no-frills airports in tier 2-3 locations where private sector may not be interested given the long gestation period. The incremental traffic generated from such regional airports would have flown into large metro airports, many of which share revenue with AAI. AAI’s income from air navigation services (ANS) would also increase. “This would have created a classic win-win for all — AAI, private airport companies, airlines, cargo, MRO and the passengers at large,” he added.

On airlines’ and AAI’s objections that privatisation has lead to higher user charges at Delhi (increase of 346 per cent) and Mumbai (increase of 164 per cent), he said that there are enough checks in place today to prevent a recurrence. “India has gone through a painful learning curve with its high-cost metro airports and the future airports are likely to functional and spartan. There would be strict guidelines on the construction cost per square metre in future, with a close monitoring by the airport-user groups, government and the regulator. With RBI recently allowing refinancing of loans to 85 per cent of the concession period i.e. around 25 years for a 30 year airport concession, the pressure of debt servicing is also spread out over a longer period. Considering all this, the fear that airport privatisation would lead to high charges is just a baseless bogey,” Dubey said.

Senior officials in AAI feel scrapping of the privatisation programme is a great opportunity for AAI to show that it can compete with private airport operators like GVK group and GMR Group. A senior official said, “Service parameters can be set for each airport and if AAI if unable to meet them, then the government can devise a mechanism to penalise us. There is no need to privatise all airports which have good traffic potential.”

AAI is working on awarding operations contracts at Jaipur and Ahmedabad to private sector players for better management. However, industry experts feel operations, management and commercial weakness is clearly visible at AAI and unlikely to be addressed.

In the long-term, according to Kaul, the role of AAI needs to be clarified as it will have a major bearing on the country’s ability to develop airport capacity. “The strategy shift from privatisation of AAI airports to O&M needs to explain clearly especially about our objectives and expected outcomes, are we going to restrict O&M to few selected and profitable airports or even loss making airports will be included in the O&M model … At present, AAI is not ‘set-up’ to succeed and is largely a capex organisation. (We) see the need for hiving off O&M as a separate entity with a professional partner/ partners in a structured JV as operations management and commercial weakness at AAI is clearly visible and unlikely to be addressed,” he said.

The are other drawbacks to the O&M model which industry sources highlight. An industry executive who did not wish to be identified said, “Chances are that only the terminal building or the non-aeronautical part of it will be handed over to the private party. The air-side and the city side may continue to be under AAI’s control. This is more like an outsourcing contract than something that the world’s leading airport operators will be interested in.”

There’s very close coordination required between the air-side, terminal and the city-side. He explained: “In crunch times, there could be severe coordination issues, with AAI and the private operator blaming each other. The only sufferers would be the end-users like passengers, airlines, ground-handlers and cargo operators who would keep getting squeezed between AAI and the private player. Duality of control in a highly time-sensitive airport environment wherein an incoming aircraft has to be airborne again in the shortest possible interval is a scary thought.”