Demonetisation: “What India has done is commit a massive theft of people’s property – a shocking move for a democratically elected government”, says Steve Forbes

In a sharp attack on Indian government’s demonetisation move, Steve Forbes, the Editor-in-Chief of Forbes magazine has gone all out and said, what they have done to the money is ‘sickening and immoral. 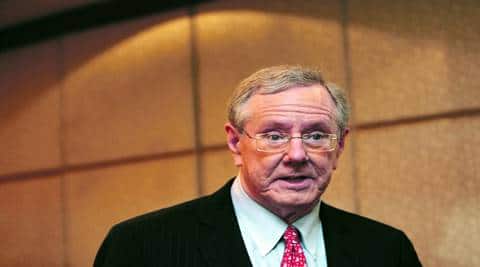 In an article written by Forbes in the magazine, he wrote about the government's decision and called it a 'massive theft of people's property'. (Source: Reuters)

In a sharp attack on Indian government’s demonetisation move, Steve Forbes, the Editor-in-Chief of Forbes magazine has gone all out and said, what they have done to the money is ‘sickening and immoral. In an article written by Forbes in the magazine, he wrote about the government’s decision and called it a ‘massive theft of people’s property’. Forbes called the Indian bureaucracy to be ‘notorious’ for corruption, red tape and lethargy. In the article, Forbes has given an overview on how the demonetisation move was carried out by the Indian government; about the cash crunch, ATM queues, and the increase in governmental control over lives.

Forbes even went on to compare the decision with former Prime Minister Indira Gandhi’s infamous sterilisation program in the 1970’s, calling it Nazi-like eugenics. Forbes wrote: “Not since India’s short-lived forced-sterilization program in the 1970s–this bout of Nazi-like eugenics was instituted to deal with the country’s “overpopulation”–has the government engaged in something so immoral.” Forbes has criticised most of the narratives which the government has been using to support the demonetisation move. He also wrote about how businesses are closing as companies are not able to pay their employees.

Forbes also condemned the excessive rules and taxes imposed by the Indian government, which he says is the reason of the informal operation of a cash-based economy. On the issue of terrorism, Forbes said that just a currency change cannot stop terrorists from committing evil acts of terror. On the issue of digitisation, he said that it will happen in a free market one way or the other, but it needs time. Forbes suggested that India should get rid of such a complex tax system, which is the main reason for tax evasion. Forbes suggestion for India is, “…slash income and business tax rates and simplify the whole tax structure; make the rupee as powerful as the Swiss franc; hack away at regulations…”

Also Read
Economic Survey 2023 to be presented tomorrow; what is it? Check time, where and how to watch live
Curbing imports from China: India to be in it for long haul
Food ministry issues guidelines for open market sale of rice by FCI
China opening up economy to aid India steel firms

Also read | Is RBI the biggest failure of demonetisation?

Forbes lambasted the countries which have been making similar moves like demonetisation by using the reasons provided by the Indian government. He said that such a move is only about making the government have more control over personal lives. He wrote: “India is the most extreme and destructive example of the anti-cash fad currently sweeping governments and the economics profession.” He added that India, apart from immorally harming its own people, has also set a bad example for the rest of the world.

Follow us on
First published on: 23-12-2016 at 12:24 IST
Latest News
SBI CBO Results 2022 announced – How to check at sbi.co.in
Russia claims gains in relentless battles in east Ukraine
Manu Kumar Jain, the “rockstar” who built Xiaomi India from scratch is leaving the company after 9 years
Cyber warfare and looming threat of virtual terrorism
Why India’s navy budget needs a big push
Communications platform-as-a-service market to reach $29B by 2025, driven by SMEs: Report
Rupee gains 9 paise to close at 81.50 against US dollar
Photos
In Pics: Amid rain, Beating the Retreat ceremony held at Vijay Chowk, marks the end of Republic Day celebrations
24 hours agoJanuary 29, 2023
Mughal Gardens now Amrit Udyan! Roses, tulips, other seasonal flowers beautify the gardens of Rashtrapati Bhavan – See Beautiful Photos
1 day agoJanuary 29, 2023
Lithuania’s Vilnius city celebrates 700th anniversary with ‘Festival of Lights’ – See Photos
2 days agoJanuary 28, 2023
Read More
×
Developed world hasn’t acted on $100 bn/yr climate finance pledge, multilateral financial bodies need to be transformed: Amitabh Kant
Economic Survey 2023 to be presented tomorrow; what is it? Check time, where and how to watch live
India’s budget to test Modi’s fiscal resolve ahead of 2024 vote
What does Union Budget 2023 have in store for India’s middle class?
Curbing imports from China: India to be in it for long haul
Food ministry issues guidelines for open market sale of rice by FCI
Switch to Hindi Edition