Do you have gold deposit in bank lockers? Government may consider imposing limit on your domestic gold holding, a finance Ministry official said. 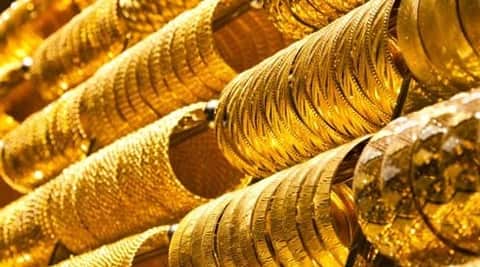 Do you have gold deposit in bank lockers? Government may consider imposing limit on your domestic gold holding, a finance Ministry official said.Gold premiums jumped to two-year highs last week as jewellers ramped up purchases on fears that the government might restrict imports after withdrawing higher-denomination notes from circulation in its fight against black money. India is the world’s second-biggest gold buyer, and it is estimated that one-third of its annual demand of up to 1,000 tonnes is paid for in black money – untaxed funds held in secret by citizens in cash that don’t appear in any official accounts. The move to withdraw higher denomination notes has already started to disrupt cash-based gold smuggling, officials have said.  Scrap gold supplies were also set to halve this quarter as the cash crunch and falling prices make it difficult for consumers to liquidate their holdings.

Meanwhile, the Cabinet on Thursday night is believed to have discussed amending laws to levy close to 60 per cent income tax on unaccounted deposits in banks above a threshold post demonetisation of high-denomination currency notes. The move comes amid banks reporting over Rs 21,000 crore being deposited in zero-balance Jan Dhan accounts in two weeks after the 500 and 1,000 rupee notes were banned, which authorities apprehend may be the laundered blackmoney.

Sources said the government was keen to tax all unaccounted money deposited in bank accounts after it allowed the banned currency to be deposited in bank accounts during a 50-day window from November 10 to December 30. There have been various statements on behalf of the government ever since the demonetisation scheme was announced on November 8, which has led to fears of the taxman coming down heavily on suspicious deposits that could be made to launder blackmoney. Officials have even talked of a 30 per cent tax plus a 200 per cent penalty on top of a possible prosecution in cases where blackmoney holders took advantage of the 50-day window for depositing the banned currency.

Sources said the government plans to bring an amendment to the Income Tax Act during the current winter session of Parliament to levy a tax that will be higher than 45 per cent tax and penalty charged on blackmoney disclosed in the one-time Income Disclosure Scheme that ended on September 30.