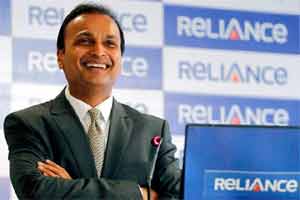 Ambani also said the company is committed to growing its dividend payouts every year. (Source: Reuters)

Ambani has been asked to meet the power minister with a concrete roadmap on improving the power supply situation.

This comes after the Delhi Electricity Regulatory Commission (DERC) issued an order last month at the behest of the government obligating the discoms to compensate the consumers for power outages in case the fault is detected at the discoms’ end.

The power distribution business was privatised by the government in 2002. Three power companies, two owned by Reliance Infra and one by Tata Power, have been operating in Delhi since then.

“Last few weeks have seen unprecedented power outages in the Capital due to local faults despite availability of adequate power. Despite repeated meetings and warnings to the senior most officials, including CEOs of your companies, things haven’t improved,” Jain wrote in the letter. He further alleged that the companies were fudging data to show improvement. “If there are 10 outages, the daily report from your company shows only seven and deliberately masks out three,” it said.

The letter also pointed to draft comptroller and auditor general report (CAG) and DERC order, which levelled allegation of corruption and financial irregularity including siphoning off funds by the company.

“You might have had a cosy relationship with previous governments in Delhi at the expense of public interest, kindly note that the new government is fully committed to protecting the interest of public and their welfare,” Jain said.

A BSES official said the company was yet to receive a copy of the letter. He, however, added that the discoms have handled the highest electricity demand in the Capital this summer. Power consumption in Delhi has breached 6,000 megawatt (MW) thrice this summer, setting a record for highest demand in the region.