To ensure the all round success of ‘Make in India’, the Centre has to actively support the creation of a private defence industrial base. 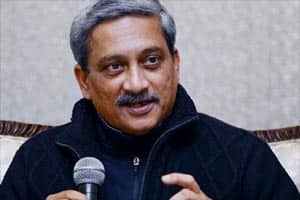 Talking about defence exports, Manohar Parrikar said that the government has removed almost all restrictions and in 2016 there will be easier ways of exporting even higher level material. (PTI)

Notwithstanding some initial steps by the NDA government — such as increasing the FDI limit to 49 per cent — a lack of clarity on policies from the defence ministry has constrained the progress on ‘Make in India’. Defence minister Manohar Parrikar had promised the revised Defence Procurement Procedure (DPP) by April but it is now expected to be released in December. A new DPP will be the starting point for any meaningful action on ‘Make in India’ in defence.

In the last five years, India has been the world’s top arms importer with a 15 per cent global share of imports. Nearly 50 per cent of the capital acquisition budget is spent on imports. This excludes many “indigenous” items assembled by Ordnance Factories (OFs) and Defence Public Sector Units (DPSUs) where a high percentage of raw materials and sub-systems are imported.

In 1995, a committee under APJ Abdul Kalam, the then scientific advisor to the defence minister, had recommended that India should improve its indigenisation content from 30 per cent to 70 per cent by 2005. Although no official data exists, the self-reliance in defence production is still estimated to be less than 35 per cent.

About 90 per cent of domestic defence manufacturing is currently done in the public sector, by the 9 DPSUs and 39 OFs. Since 2001, when private participation was allowed in defence sector, 222 letters of intents and industrial licences have been issued to around 150 firms. Of these, only 46 firms have commenced production so far.

Globally, 80 per cent of components, aggregates and assemblies of complex weapon systems and aircraft are made by MSMEs. In India, more than 6,000 MSMEs are currently supplying components and sub-assemblies to the DPSUs, OFs, DRDO and private firms. The defence manufacturing sector currently employs more than 2 lakh people in India. This size of military industrial workforce is similar to nations like the UK and France, which are the top defence manufacturers.

India allocated 1.74 per cent of its GDP towards defence spending in FY16 and is among the top 10 countries in the world in terms of military expenditure. Approximately 40 per cent of the defence budget is allocated for capital acquisitions, which mainly goes towards imports from foreign suppliers. Between 2007-08 and 2014-15, defence budget more-than-doubled from Rs 92,000 crore to Rs 2,22,370 crore, growing at an average rate of 12 per cent per annum. The capital budget also more-than-doubled from Rs 37,461 crore in 2007-08 to Rs 81,965 crore in 2014-15.

Despite the sustained expenditure over the last decade, the equipment profile of the armed forces is in an alarming state. While the desirable equipment profile, as per the defence secretary’s testimony to Parliamentary Standing Committee, early this year is 30:40:30 (30 per cent state-of-the-art, 40 per cent current and 30 per cent nearing obsolescence), experts estimate the current profile to be 15:45:40. The Defence Acquisition Council (DAC), chaired by the defence minister, has approved procurement of equipment for more than Rs 1,17,830 crore during the UPA-II regime. Another Rs 1,50,000 crore worth of approvals have been given by DAC under the NDA government.

A modelling of 35 selected projects cleared by DAC, along with their likely dates of induction — from 2012 to 2023 — has been done by a foreign manufacturer. It shows that defence ministry will need $40 billion for just these 35 purchases. This translates into a 7 per cent rise in capital budget in real terms. While the capital acquisition budget has risen in absolute terms in the last few years, it has hardly seen any increase in real terms.

The government policy now aims to achieve 70 per cent indigenisation in defence products by 2027. This translates into an Indian defence market of Rs 87,000 crore by 2022 and Rs 1,65,000 crore by 2027. It presents a huge opportunity to the DPSUs, foreign manufacturers, Indian private players and MSMEs. But the question is of resources. Defence production needs heavy investment over a long period, so as to bring in modern technologies with low economies of scale. Unlike other sectors, defence industry is a monopsony in which the single buyer, the government, is also the authority laying down procurement policies. This makes active government support essential for private defence manufacturers, a fact borne out by the experience of countries — the US, Israel, Brazil and France — where private defence industry has flourished.

Under ‘Make in India’, the government has to actively support the creation of a private defence industrial base. The government will have to fund research and development, provide a low-interest regime to reduce capital costs, provision specific tax benefits, assure consistent sectoral policies, place firm orders and encourage exports to achieve economies of scale.

For policies to create synergies rather than controls, it is essential that the government creates internal capacity for defence acquisition and manufacturing. While the Pentagon has 12,000 cost engineers on its rolls, the defence ministry has none. The structure and the organisation of the ministry, particularly the department of defence production, which is responsible for DPSUs and OFs, puts private sector at a disadvantage. If form has to follow function, the ministry will have to be restructured to promote private players.

Most of these suggestions form part of the deliberations of experts committee chaired by Dhirendra Singh, which submitted its report on amendments to DPP-2013 to the defence minister in August. Of the 43 recommendations made, 15 directly pertain to ‘Make in India’ while the rest concern the DPP. These recommendations on the DPP also have a direct impact on indigenous defence production. The future trajectory of Make in India in defence will be determined, to a great extent, by the action taken by the Centre on the Dhirendra Singh committee.