Crossing 8% growth barrier should not be difficult: Suresh Prabhu

With the government policies like ‘Make in India’ and ‘Digital India’ being in place, crossing 8 per cent growth barrier should not be difficult, Railway Minister Suresh Prabhu said today. 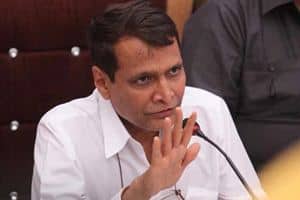 With the government policies like ‘Make in India’ and ‘Digital India’ being in place, crossing 8 per cent growth barrier should not be difficult, Railway Minister Suresh Prabhu said today.

“In the last quarter, India grew by close to 8 per cent… whatever actions taken in the last two years including fixing the balance sheet of the banks, helping the corporates to fix their own balance sheets all of that should add in achieving better numbers in the years to come,” Suresh Prabhu said.

“Therefore, crossing this 8 per cent psychological barrier should not be difficult… if we go like this and many other programmes that government has started like Make in India, Digital India, it should really take us to even much higher growth numbers,” he said at Shriram Sanlam Awards function here.

He also asked all the stakeholders, including media, to work together to reach higher growth numbers.

Consumption and investment are two components which are linked to boost growth, he said, adding that both are very much dependent on psychology and sentiment.

Indian economy grew at 7.9 per cent in the fourth quarter of 2015-16, taking the overall GDP growth to a five-year high of 7.6 per cent in the fiscal, mainly on account of good performance of manufacturing and farm sectors.

Speaking at the occasion, Minister of State for Finance Jayant Sinha said journalists must trust intentions of the government.

“The intention of the government is what is in the best interest of the country… we are putting nation before anything,” he added.