Even before the pandemic spread its tentacles in India, the country’s goods exports had contracted by 1.5% y-o-y up to February this fiscal to $293 billion. 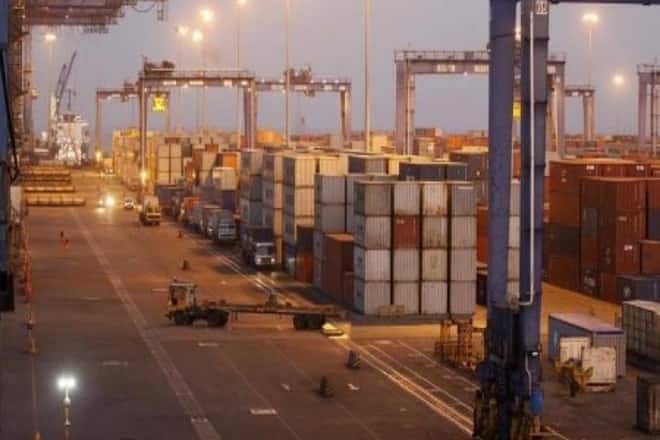 With vast swathes of key markets — the US and the EU — badly bruised by the Covid-19 outbreak and migrant workers back home following a nationwide lockdown, export hubs in India are pummelled by an unprecedented crisis. Exporters from hubs, including Tirupur, Chennai, Surat, Hyderabad, Pune and Kochi, that FE spoke to were bracing for harrowing times. About 25-30% of orders had been cancelled across various product categories. Overseas buyers are using the crisis to renegotiate contract terms and seek a cut in product prices. Domestic manufacturing units are shut and logistic chains in tatters, even though ports are somewhat functioning.

Most of the top 25 destinations for engineering goods exports are facing a lockdown. These 25 markets together accounted for $53 billion exports in the April-February period, according to Ravi Sehgal, chairman of EEPC India.

Exporters from Tirupur, the country’s larget garment hub that is expected to have shipped out aparrel worth Rs 26,000 crore in FY20, apprehend a 50-60% year-on-year slide in despatches in FY21. The cluster – with 1,000-odd units, mostly MSMEs – employs around 6,00,000 people. About a half of them are migrant labourers, who have gone back home with no certainty of a return anytime soon.

The leather companies in Chennai say summer sales are gone and, given the crisis in the US and the EU, the outlook for winter orders remains uncertain. At the all-India level, orders worth about Rs 8,000 crore have either witnessed cancellation or a deferment of delivery, said exporters.

Rafeeque Ahmed, chairman of major leather exporter Farida Group, said: “We anticipate that we will lose at least one quarter’s business. There is hardly any enquiry from the US and Europe.” Nearly 70% of the leather exporters are SMEs.

Raja M Shanmugham, MD at Warshaw International and president of the Tirupur Exporters’ Association, said” “We have not even received our payments for exports in January and February, and much of the stocks despatched in March are stuck mid-way. I have no clue when the markets will revive and we will get our dues.”

The already-dwindling farm exports are expected to plunge further in FY21. Even large companies are not unscathed. Having witnessed a dream run in the December quarter and in February (when its exports outstripped domestic sales), Bajaj Auto’s stellar show was jolted by the pandemic. Rakesh Sharma, ED at Bajaj Auto, projected an up to 20% y-o-y decline in exports in FY21 and maintained that the picture still remained hazy. While the auto maker hasn’t yet seen cancellation of orders, it fears its payment ability will be eroded if the situation worsens.

Without enough labourers, employment-intensive sectors like garments, leather and even gems and jewellery are in for an extended period of uncertainties. Cash reserve is depleting fast and in the absence of adequate and smooth credit flow, and many units, especially small and mid-sized ones, are on the brink of collapse.

The EU, the US and China alone account for 40% of India’s overall goods exports. Even before the pandemic spread its tentacles in India, the country’s goods exports had contracted by 1.5% y-o-y up to February this fiscal to $293 billion.

In Surat, which houses some 20,000 diamond units, about 30-35% of export orders have been cancelled, according to Dinesh Navadia, chairman of the Gujarat chapter of the Gems and Jewellery Export Promotion Council. Production has come to a halt after the lockdown. Almost 80% of the gems and jewellery from India are exported to the US, Hong Kong and China, and nine out of every 10 rough diamonds in the world are being cut and polished in Surat.

In the pharmaceutical sector, since Indian companies rely heavily on China for key raw materials, until the supply lines are restored fully there, domestic firms will get hit to that extent. Also, input prices have gone up due to limited supply, while the largest market, the US, is facing a recession.

Nevertheless, large pharma companies are seen as weathering the crisis better than the rest. A spokesperson for Dr Reddy’s said, “The market demand continues to be good. However, our manufacturing facilities are operating at below-normal levels… and there are challenges related to the supply chain.”

The Rs 12,000-crore carpet industry, with a significant presence in Uttar Pradesh, is apprehending a loss of about Rs 2,000-2,500 crore in FY21. Sidhnath Singh, chairman of the Carpet Export Promotion Council, said the order flow has already been hampered since January, with the crisis breaking out in China. However, it just exacerbated in March when the epicentre shifted to the US, which accounts for well over a half of our exports.

More than 4,500 natural rubber dealers and one lakh farmers in Kerala are staring at a dark future, as tyre companies have shut production. Dealers alone have incurred losses to the tune of Rs 400 crore in just the first week of lockdown.

Similarly, as Tea Board deputy chairman Arun Kumar Ray pointed out, tea output from the first flush in Darjeeling could crash by as much as 75%, as hardly any harvest took place. West Bengal’s rice exports have been dwindling over the years, and the pandemic has just worsened the situation.

Pratap Nair of Vijayalaxmi Cashews, one of the largest cashew exporters, said: “If problems with movement of export cargo to ports in Andhra Pradesh, Tamil Nadu and Kerala not sorted out fast, many orders will have to be cancelled.”

(With inputs from Sarita Varma in Thiruvananthapuram, Deepa Jainani in Lucknow, Nanda Kasabe in Pune, Indronil Roychowdhury in Kolkata and Banikinkar Pattanayak in New Delhi)