Court on coal scam: PMO officers during UPA rule not ‘above board’ 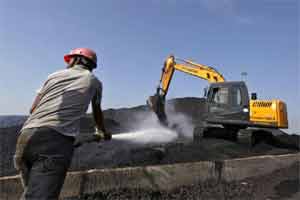 The world's largest coal miner CIL today reported a 13.9 per cent increase in consolidated net profit at Rs 3,718 crore for the quarter to December on the back of higher sales. (Reuters photo)

A special CBI court hearing the coal block allocation scam cases on Monday came down heavily on the coal ministry and the Prime Minister’s Office during the UPA regime for the “favour” shown to particular private company by them.

Taking cognisance of the chargesheet submitted by the CBI, Special CBI judge Bharat Parasher noted that it was “prima facie clear” that Grace Industries Ltd (GIL) and its two directors had entered into a criminal conspiracy with senior officers of the coal ministry “with a view to mis-appropriate the nationalised natural resources of the country….”

“I am constrained to observe that even the working of the officers of PMO also does not appear to be above board. When there was a specific observation by the Minister of State for Coal regarding the case of M/s GIL then at least the officers in the PMO ought to have highlighted the said fact before the file was submitted to the Prime Minister. Be that as it may the aforesaid nature of proceedings however clearly shows the extent to which the MOC officers went in order to favour a private party i.e M/s GIL in securing allotment of a Coal Block,” noted the court, adding that the coal secretary at the time, HC Gupta, had also “continued to support the case of M/S GIL” in his meetings with then PM and coal minister Manmohan Singh.

The 40 page order was issued in a case relating to allocation of two coal blocks to GIL. The court has now directed the CBI to submit a further investigation report by February 4.