Court summons all accused for offences of criminal conspiracy, breach of trust and under provisions of Prevention of Corruption Act and directs them to appear before it on April 8. 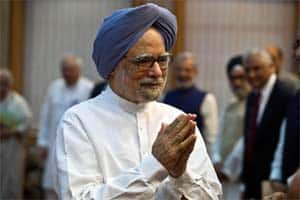 Former Prime Minister Manmohan Singh, industrialist Kumar Mangalam Birla and former Coal Secretary P C Parakh were today summoned as accused in a coal scam case by a special court which observed that Singh was roped into the criminal conspiracy to “accommodate” M/s HINDALCO in Talabira-II coal block allocation in 2005.

Rejecting the CBI’s closure report, the court also summoned M/s HINDALCO and its two top officials, Shubhendu Amitabh and D Bhattacharya, as accused in the case.

“…prima facie it is clear that the impugned criminal conspiracy which was initially conceived by Shubhendu Amitabh and D Bhattacharya and Kumar Mangalam Birla and M/s HINDALCO was carried out further by roping in P C Parakh, who was Secretary (Coal), and thereafter the then Minister of Coal, Dr Manmohan Singh,” Special CBI Judge Bharat Parashar said in his 73-page order.

“However, from the nature of action of the aforesaid persons, it is also prima facie clear that though Secretary Coal (Parakh) and Minister of Coal (Singh) were playing different roles, there was a concerted joint effort to somehow accommodate M/s HINDALCO in Talabira-II, coal block.

“It was the central common objective of the impugned criminal conspiracy known to all concerned,” the court said.

If found guilty, the accused may face punishment of upto life imprisonment as the court has taken cognisance of offences of criminal conspiracy, criminal breach of trust by public servants or by banker, merchant or agent under the IPC and under provisions of the Prevention of Corruption Act.

Reacting to the court order, Singh said he was upset but expressed confidence that truth will prevail in a fair trial.

“Of course, I am upset but this is part of life,” he told reporters here when asked for his reaction on the court order.

“I have always said I am open for legal scrutiny… I am sure the truth will prevail and I will get a chance to put forward my case with all the facts,” Singh added.

Maintaining that he respected the judicial process in the country, Singh said, “I hope, in a fair trial, I will prove my innocence.”

HINDALCO, the flagship firm of the Aditya Birla Group, said none of its officials, including Birla, have pursued any unlawful or inappropriate means for securing the allocation of the coal block.

The company said in a statement that it would study the order of the court in detail “and would defend its case through legal process.”

Parakh expressed surprise over the court summons to him and maintained that he had done nothing wrong or illegal.

This is not the first time a former PM has been summoned as accused in a criminal case. Late PM P V Narasimha Rao was made an accused and chargesheeted in three different cases, including in the JMM MPs bribery case, but was acquitted in all of them.

The special court, which summoned Singh and others for April 8, observed that Singh had approved a proposal put forth by Parakh to accommodate HINDALCO in Talabira II and III coal block while ignoring the caution of two officials of the Prime Minister Office (PMO).

“Again his (Singh’s) approval of the proposal put-forth by P C Parakh vide his note dated September 12, 2005 to accommodate M/s HINDALCO in Talabira-II and III coal block while ignoring the words of caution put-forth by K V Pratap and Javed Usmani, the two officers of PMO in their notes dated September 21, 2005 and September 26, 2005 respectively regarding relaxation of the already approved guidelines, again prima facie shows that there was a conscious effort on his part to somehow accommodate M/s HINDALCO in Talabira-II coal block,” the judge said.

Congress: Court summons does not make one guilty

With former Prime Minister Manmohan Singh summoned as accused by a special court in a coal scam case, Congress today said that receiving court summons does not make one guilty.

“Sorry to puncture the brouhaha, but receiving a court summons does not make one guilty. That is elementary law. Right?”, party spokesman Sanjay Jha said in a series of tweets.

Jha insisted that it was former PM Singh who pushed for auctions in coal block allocations. “He sought transparency, resisted by BJP-ruled states”.

Singh, industrialist Kumar Mangalam Birla, ex-coal secretary P C Parakh and three others were today summoned as accused by a special court in a coal scam case pertaining to allocation of Talabira-II coal block in Odisha in 2005 and asked to appear before it on April 8.