China’s economy expanded 7.3 per cent in the third quarter. 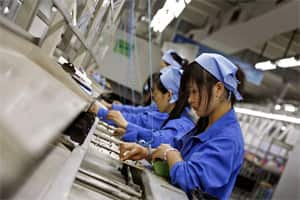 China’s manufacturing growth picked up to a three-month high in October, a closely watched private survey confirmed today, but did little to counter a picture of slowing growth in the world’s second-largest economy.

British bank HSBC’s final purchasing managers index (PMI) came in at 50.4 last month, above the 50-point level that separates expansion and contraction and the strongest since July’s 51.7.

The index tracks activity in factories and workshops and is considered a key indicator of the health of China’s economy, a major driver of global growth.
On Saturday China’s official PMI from the National Bureau of Statistics came in at 50.8 last month, lower than the 51.1 recorded in September.

HSBC’s figure was the same as its preliminary result announced last month and higher than the 50.2 recorded in September, “but nonetheless continued to signal only a fractional improvement in the health of the sector”, the bank said in a release.

“We still see uncertainties, given the property downturn as well as the slow pace of global recovery, and expect further monetary and fiscal easing measures in the months ahead.”

China’s economy expanded 7.3 per cent in the third quarter, the government said in October, lower than the 7.5 per cent of the previous three months and the slowest since 2009 at the height of the global financial crisis.

Authorities this year set a 2014 growth target of about 7.5 per cent, the same as 2013, though officials including Premier Li Keqiang say they will be satisfied even if actual expansion is slightly slower, so long as employment remains resilient.

China has since April used a series of limited measures to underpin growth, including targeted cuts in reserve requirements – the amount of funds banks must put aside – and a 500 billion yuan (USD 81 billion) injection into the country’s five biggest banks for re-lending.