CEO pay in 2015 tamed by bond yields, US Fed expectations

Interest rates are used to value these lump-sum pension payments in today’s dollars. If a company were to deposit money in a bank or invest in bonds, its value would grow over time. The higher the interest rate, the more that money would grow. 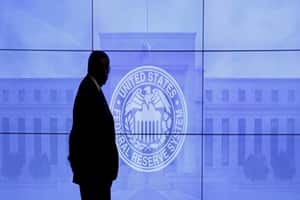 The median total pay package was $11.3 million, according to ICS. (Reuters)

Chief executives of the biggest US corporations saw their pay rise in 2015 at the slowest rate in seven years, but it’s not because their boards were suddenly getting tough.  The main cause was something far more arcane: bond yields and interest rates.

The nominal amounts set aside by companies to cover pensions fell substantially last year, a result of rising bond yields and anticipation of the US Federal Reserve’s first interest-rate hike in nearly a decade.

The smaller pension component – a theoretical amount, to be paid in the future – has eaten into the value of total compensation packages and muddied the closely scrutinized relationship between company performance and executive pay.

The median total pay package was $11.3 million, according to ICS.

Taken at face value, the negligible median pay rise would appear to appease shareholders fretting over high CEO pay at a time when the S&P 500 index was about flat in 2015.

But these figures include an incremental value that is added each year to an executive’s pension pot, to be paid out on retirement.

Strip away these pension values and the median S&P 500 pay rise was 3.7 percent in 2015, more in line with the 4.6 percent rise a year earlier, excluding pensions.

The incremental pension value set aside by CBS Corp for Leslie Moonves, the top-paid CEO of an S&P 500 company, was just $421,021 last year – roughly a seventh of the $2.8 million designated a year earlier.

The value of General Electric Co CEO Jeff Immelt’s pension and other deferred earnings fell to about $6 million in 2015 from about $18 million a year earlier.

Though Immelt’s total compensation fell 11.5 percent to $33 million, his take-home pay actually rose, to about $10 million from $9.6 million a year earlier.

ICS estimates that the value of these incremental pension amounts fell nearly 57 percent in 2015, pulling down total compensation by 6.7 percent.

The ICS data covers 337 companies, or about two-thirds of the S&P 500, and excludes those which have changed their CEO in the last two years or whose financial year does not align with the calendar year.

To be sure, the changing pension values affect only those executives who have chosen a lump-sum pension payment, rather than installments to be paid through their lifetime, and the total pay disclosed in proxy filings may differ from the compensation actually realized by executives, due to stock awards and other miscellaneous items.

So why did pension values fall so much in 2015?
Interest rates are used to value these lump-sum pension payments in today’s dollars. If a company were to deposit money in a bank or invest in bonds, its value would grow over time. The higher the interest rate, the more that money would grow, meaning a smaller initial amount must be set aside today.

Conversely, when interest rates are low, companies must set aside more money to meet their future pension obligations.

Pension values were already high in 2014, due partly to higher life expectancy but also because bond yields were falling and near-zero interest rates were expected to persist.

Then, in 2015, expectations mounted that the Federal Reserve would hike rates; in December, it did. Corporate bond yields rose about 40 basis points over the year.

All of this helped to drag down the total current value of pension promises by roughly 5 percent, said Dave Suchsland, Philadelphia-based senior consulting actuary at Willis Towers Watson, an insurance brokerage and advisory.

This year, pension values and their relation to CEO pay are unpredictable. While the Fed is indicating that a hike in interest rates could happen in the coming months, bond yields – affected not just by rate hikes, but a variety of macroeconomic factors – are moving in the other direction.

A near-certainty, however, is that stock-based compensation, which offset the fall in pension values in 2015, will continue to rise.

Performance-based compensation, of which stock-based pay is a major component, has been rising steadily in recent years, reaching a record level of about 55 percent of total pay in 2015, said Roe.