The Centre today opposed the petition filed by senior Congress leader Jairam Ramesh questioning the decision to treat Aadhaar Bill as a money bill saying that the constitutional provision bars him from challenging it. 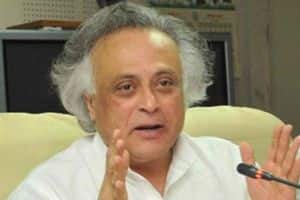 Ramesh said he has been saying that the GST Bill has not come to the Rajya Sabha not because Congress is opposing it but due to large sections within the BJP which are deeply uncertain about the legislation and its inflationary consequences. (PTI)

The Centre today opposed the petition filed by senior Congress leader Jairam Ramesh questioning the decision to treat Aadhaar Bill as a money bill saying that the constitutional provision bars him from challenging it.

“Under the Constitution, it is a settled position that money bill certified by the Speaker is beyond challenge,” Attorney General Mukul Rohatgi submitted before a bench headed by Chief Justice T S Thakur which had sought his assistance.

However, senior advocate P Chidambaram, appearing for Ramesh, submitted that when there was a violation of rule of law, “locus is not the ground on which the petition can be thrown out.”

When the bench, also comprising Justices R Banumathi and U U Lalit, wanted to know “if it (treating Aadhaar Bill as Money Bill) is open to judicial review”, the Attorney General said there was no violation of fundamental right of Ramesh so the petition filed by him under Article 32 of the Constitution cannot be entertained.

Chidambaram responded by saying that there was violation of rule of law which forms basic structure of the Constitution and as such the petition needed to be entertained.

He said Aadhaar Bill cannot be treated as Money Bill so the petition has been filed under Article 32.

The senior Congress leader informed the bench that the Bill had its passage in the Lok Sabha through voice vote but the Rajya Sabha Chairman before whom the complain was made said he has no power to act on the Bill certified by the Lok Sabha Speaker.

The bench, which noted his submission that it was a grave matter and needs proper hearing, posted for third week of July.

The apex court had on April 25 sought the assistance of the AG but did not issue notice on the plea of Ramesh.

Lok Sabha had on March 16 passed the Aadhaar bill that aims at better targeting of subsidies through the Aadhaar unique identity.

The House had earlier adopted the Aadhaar (Targeted Delivery of Financial and Other Subsidies, Benefits and Services) Bill, 2016, by a voice vote after rejecting recommendations for five amendments made by the Upper House.