The e-NAM facility, aimed at ushering in reforms in farm marketing, is making slow progress, even in states like Haryana where it has picked up more than in other states. 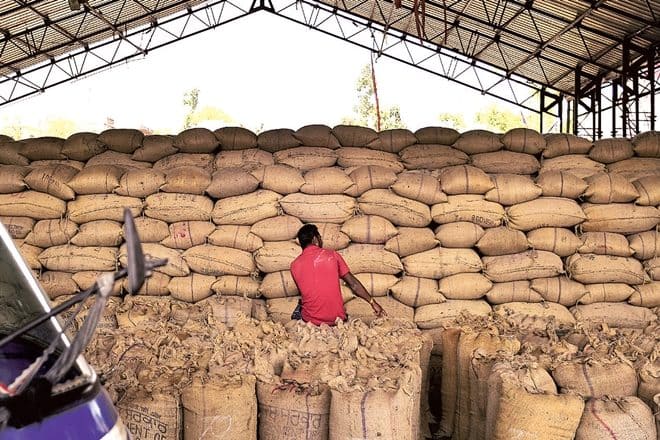 The BJP promised farmers a 50% profit over their cost of production when it came to power in 2014. Five years later, as market prices of various crops drop below the minimum support prices by 20-30%, given grossly inadequate official procurement, that pledge rings hollow.
Hiking MSPs of various crops by 4-52% for Kharif 2018, the government claimed it had raised the benchmark prices appropriately to honour its promise. Turned out, it calculated the premium over A2+FL costs (MSPs of some key crops like wheat were already higher than A2+FL expenses by 50%), instead of the more ambitious C2 costs, as recommended by the Swaminathan commission.

The Rs15,053-crore ‘Pradhan Mantri Annadata Aay SanraksHan Abhiyan’ (PM-AASHA), launched to lend greater price support to farmers, failed to make a significant headway. The procurement of pulses and oilseeds by the public sector is expected to drop by more than a third in the kharif 2018 season from a year before.

Just about 3% of the summer crop (pulses and oilseeds) output of 314 lakh tonnes were procured by state-backed Nafed as of January 3 and it may end up buying just about 5% before the season ends. Farmers, meanwhile, had to sell pulses and oilseeds at over 30% below the MSPs during October-December 2018.

One reason for the limited procurement has been official agencies’ inability to offload for fear of incurring huge losses. The budgetary support for the PM-AASHA has also been too little to make an impact. Noted farm economist Ashok Gulati says, a “procurement policy without clarity on disposable strategy is like driving a bicycle on one wheel”. More importantly, as Gulati points out, the MSP policy cannot reach more than 20% of peasantry even with augmented procurement of pulses and oilseeds and, therefore, cannot be a solution to farmers’ distress.

The loan waiver that the Congress has now promised will also not benefit more than 30% of peasantry, who have access to institutional credit, according to Gulati. Already, the loan waivers promised by the state governments are exceeding Rs1.8 lakh crore. Given the limitations of these traditional models, experts reckon the Rythu Bandhu scheme of Telangana could be a better option to try. This scheme promises Rs4,000/acre to land-owning farmers for two seasons in a year, which will cost roughly Rs12,000 crore per annum to the state exchequer. It seems to have reached more than 90% of farmers, and has given good political outcomes, said Gulati. The BJP’s another promise to “radically transform FCI” by “unbundling FCI operations into procurement, storage and distribution for greater efficiency” hasn’t yet taken off.

The usual modest hikes in MSPs during the NDA period (before 2018 kharif), while helping to keep inflation in check, didn’t boost farmers’ income. Not surprisngly, farm distressed played a pivotal role in trumping the BJP in at least two states—Madhya Pradesh and Rajasthan.

Farm sector growth, too, plunged to an average 2.8% per annum during the NDA’s five years (including the advance estimate for FY19), sharply lower than 4.3% in UPA-2. Of course, the NDA regime saw two years of below-par monsoon, against one in the UPA-2.

The e-NAM facility, aimed at ushering in reforms in farm marketing, is making slow progress, even in states like Haryana where it has picked up more than in other states. In the past, some states even showed their MSP operations as part of e-NAM sales, raising suspicion about the real achievements under this.