PM Narendra Modi’s ‘Make in India’ initiative in aviation is set to get a boost with the Federal Aviation Administration approving two aircraft parts…. 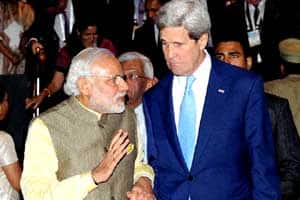 Prime Minister Narendra Modi’s ‘Make in India’ initiative in aviation is set to get a boost with the Federal Aviation Administration approving, for the first time, two aircraft parts developed in India for use by manufacturers in the United States.

The two products approved by the regulator are a four-person life raft developed by the Indian arm of UTC Aerospace Systems (UTAS), and nickel-cadmium batteries developed by Hyderabad-based HBL Power Systems.
Currently, aircraft parts exported from India are subject to multiple checks and have to be certified by FAA or European Aviation Safety Agency — depending on where the aircraft is being assembled — before being used by manufacturers in these places.

The approval accorded by the FAA is significant as it enables UTAS and HBL to directly source these products to manufacturers in the United States. The life raft sourced from UTAS will be used by US-manufactured general aviation aircraft manufacturers. The nickel-cadmium batteries have been approved for use in FAA type certified A320 and B737 aircraft in the US.

Sources in the Directorate General of Civil Aviation (DGCA) told The Indian Express the approval from the FAA implies that these two products are now internationally certified. “It opens opportunities for the industry to build their brand as well as volumes in the United States and in other global markets,” a senior official in the DGCA said.

The certification for these aircraft articles developed in India, ahead of President Barack Obama’s visit and submission of the safety audit report, augurs well for a possible upgrade, say senior officials in the civil aviation ministry.

“The approvals are not directly linked to the upgrade but they do show confidence in the Indian safety oversight system,” a ministry official said.

The ‘Letter of TSO Design Approval’ (LODA) for the two aircraft articles developed in accordance with Indian Technical Standard Order (ITSO) has been issued by the FAA under the Implementation Procedures of Airworthiness (IPA) signed with the DGCA. It forms a part of India’s Bilateral Aviation Safety Agreement (BASA) with the US.

To promote the development of the aerospace industry under the PM’s ambitious ‘Make in India’ scheme, most state governments are coming up with their aerospace and defence manufacturing policies providing significant incentives and policy support to potential investors.

“India should push for bilateral counter-operability on aircraft part certification with US and EU. This will allow DGCA-certified inspectors to approve aircraft parts as acceptable, with no further checks by FAA or EASA. This will help bring down the time and cost incurred in getting ‘Made in India’ parts certified,” said Amber Dubey, Partner and India Head of Aerospace and Defense at global consultancy KPMG.