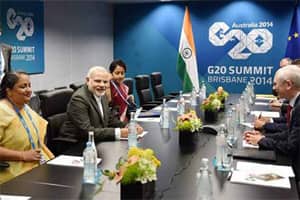 With India being the largest recipient of remittances in the world, Prime Minister Narendra Modi will at the G20 Summit this weekend press for cutting transaction cost for transferring money from abroad.

Prime Minister Narendra Modi on Saturday pushed his government’s domestic agenda on black money at an informal meeting of BRICS leaders ahead of the Group of 20 Leaders Summit. This meet serves to coordinate positions between the five big developing economies of the world and pull in their combined weight at the G20 Summit.

At the informal meeting, the five leaders also took stock of the progress made in the establishment if the New Development Bank and the Contingent Reserve Arrangement agreed upon in the sixth BRICS Summit in Fortaleza in Brazil mid-July this year. They asked their finance ministers to designate the President and the Vice-Presidents of the new bank well in advance of the next BRICS Summit.

Russia is scheduled to host the seventh BRICS Summit mid next year. “The leaders also announced the setting up of an Interim Board of  Directors that will lead the next phase establishing the NDB,” a media note on the informal meeting said. The leaders also asked their Central Bank Governors to ensure that the Inter-Central Bank Agreement foreseen in the CRA be concluded by the Summit in Russia.

The leaders exchanged their views and shared their perspectives on measures to promote growth and job creation. The G20 has set a target for growing their economies by an additional 2 per cent over the next five years. They also discussed issues related to infrastructure, trade, energy, strengthening of the financial system, and cooperation in tax matters.

At the fifth Summit in Fortaleza, India had wrenched the Presidency of the NDB, while China got to locate the bank’s headquarters in Shanghai. India also got the BRICS agree to same contribution to the bank’s capital. Modi had represented India in Fortaleza, the summit itself leading to a 72-point declaration including the bank, to have an authorised capital $100 billion and a $100 billion CRA.

At the informal meeting today, the leaders expressed their commitment towards the expeditious ratification of both instruments. These instruments would contribute to the stability of the international financial system, they noted. The seventh BRICS Summit will be held in the Russian city of Ufa next year.