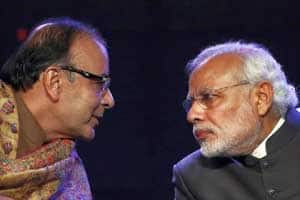 Finance Minister Arun Jaitley Tuesday said Prime Minister Narendra Modi’s Lok Sabha poll campaign contention that huge amounts of black money are stashed abroad and once they are brought back each citizen could get Rs 15 lakh each was an “illustrative” statement.

In the run-up to the assembly elections in Delhi, the BJP president had called Modi’s pronouncement an election “jumla”. Today, the finance minister avoided spelling out the quantum of black money stashed abroad. “There are various assessments which are made but in the absence of any particular authenticity with regard to those assessments, since statements made in this House are sacrosanct, I am not going to commit myself only to a speculative figure,” he said replying to questions in Rajya Sabha.

Jaitley was asked whether the government has made any assessment of the quantum of black money stashed abroad by Congress’s Digvijaya Singh.

Later, Samajwadi Party’s Kiranmay Nanda asked “On what basis did the Prime Minister announce that Rs 15 lakh would be deposited to everybody’s account?” Jaitley responded, “There are various versions of the quantum of monies. And it is an illustrative statement which indicates that if any of those versions are accepted which indicate a higher amount of black money lying outside India, then pro rata that is the benefit accrues to the citizens of India. It is a statement which has been made by several people in that context and it must be taken entirely in that context.”

The Finance Minister said the government is more than serious than any other government on unearthing black money and will not spare anyone. He said as regarding the 628 names in the HSBC list, the government has identified a “large number of them” and is in the process of getting details of their accounts.

“By the 31st of March, the assessments with regard to those people are to be completed. We have, in this process, found out that the total income, which is evaded, is to the extent of about Rs 3,250 crore for which there is a tax impact and that assessment is being completed,” he said. In over 200 cases, he said assessments have been completed, demands placed and penalties imposed.

“In some cases, recoveries have been made. Additionally, in about 77 of those cases, criminal prosecutions have already been filed in courts… Nobody, who is a part of that HSBC list, against whom the evidence is now forthcoming, is going to be spared in this exercise. “

Jaitley said the SIT constituted by the Supreme Court has recommended that the law be tightened. The government, he said, plans to introduce in this session a separate law with regard to black money generation, particularly, with regard to moneys being kept outside the country.

“There is a proposal to make certain deterrent punishments with regard to those people who are involved in that process. The amount of penalties is intended to be increased. There is also a proposal that we will make keeping a foreign asset without permission, illegally, as a predicate offence for the purposes of money laundering,” he said.