The boom in new green jobs is being led by Asia where governments in countries such as China and India are embarking on massive programmes to use more renewable energy. 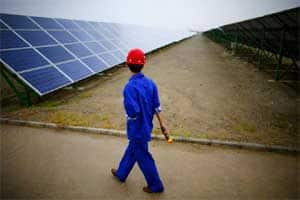 Multiple sources that FE spoke to suggested that the Telangana government was deliberating the options to bring the discovered tariff down. (Reuters)

Renewables are powering a rare bright spot in the energy industry, with record job hiring in solar, wind and hydro partly offsetting the biggest round of job losses in the oil and gas sector in almost two decades.

The boom in new green jobs is being led by Asia where governments in countries such as China and India are embarking on massive programmes to use more renewable energy.

The fresh opportunities come as the oil sector is suffering its worst downturn since the late 1990s, encouraging engineering students to rethink their options and even mid-career switches for some who have spent more than a decade in the oil sector.

“It’s a matter of time for me personally before I make the move,” said a Singapore-based project manager for offshore construction at an oil and gas firm, who is considering shifting into solar after 15 years in the oil sector.

“For me, it’s not a question about running out of oil, but that the industry is losing popularity on the consumer end,” said the manager, declining to be named due to his current employment status.

Direct and indirect employment in renewable energy jumped 18 percent, or by about 1.2 million, last year to 7.7 million globally, with most of the new jobs being created in Asia, according to the International Renewable Energy Agency (IRENA).

Some of the biggest gains have come in countries such as China, India, Indonesia, Japan and Bangladesh and the overall figure could top 16 million globally by 2030, IRENA said.

That stands in contrast to oil and gas, where more than 200,000 jobs have been cut worldwide since oil prices collapsed last year, according to recruiter Swift Worldwide Resources.

“The employment situation is a complete disaster,” said Didier Le Hech, who until recently headed operations in Gabon, West Africa, for Weatherford International.

Le Hech, who was one of 11,000 staff laid off at the oil field service provider this year, said he was looking for work in Southeast Asia, but given the tough market was prepared tocast his net widely.

The layoffs are being nervously watched on campuses around the world by trainees in the oil and gas industry.

“We’re keeping our options open,” said Faizzin Khafidz, a mechanical engineering student at the National University of Singapore, who is doing an internship at Keppel Corp, one of the world’s largest offshore rig builders.

“Personally I am open to opportunities to join the renewables sector especially if it is going to grow as it should,” he added.

Singapore is a major oil trading hub and servicing port, but the pain of the downturn is being felt with many oil servicing ships and drilling platforms idled off the island city-state.

Interest in green energy jobs is playing out at colleges.

“There are huge amounts of western money flowing into renewable energy in Asia,” says David Russell, chief executive of Equis Funds Group, which has invested $2.4 billion in Asian projects over the last two years.

In order to keep up with demand for green jobs, recruiters have been forced to develop placement expertise in renewables.

“Because the oil and gas sector has been so hard hit, we’ve seen lots of people attempting to transfer their skills across to renewable energy,” said Adam Carabetta, a recruiter at Drake in Singapore.

The shift comes as many governments have vowed to curb carbon emissions by using more renewables.

In India, IRENA expects 1 million new jobs to be created after the government pledged to triple installed wind capacity and raise solar power capacity 33 fold by 2022.

This leaves some embarking on oil sector careers worried.