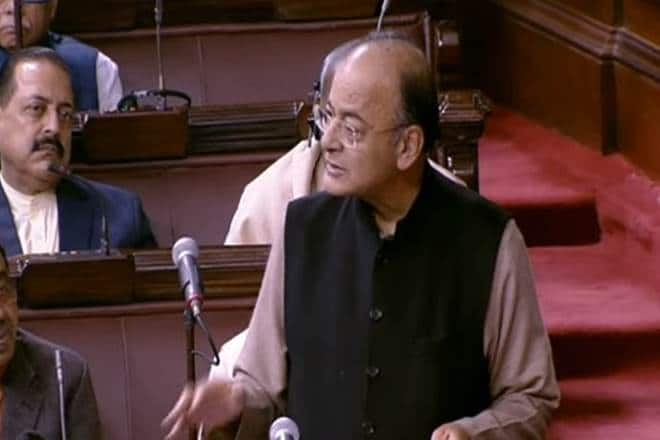 Speaking in Rajya Sabha, Finance Minister Arun Jaitley today said that spend on rural roads was up manifold. He also condemned the handling of the economy under the Congress-led UPA government. During his speech, FM Jaitley said, “Rs 55,000 crore has been allocated for MNREGA, Rs 1.7 lakh crore for food subsidy.” FM Jaitley highlighted the GDP growth under Congress and compared it with the jump under BJP led NDA government. FM Jaitley said, “GDP growth in 2012-13 was 5.3 per cent and 6.3 per cent in following year under the UPA. This has considerably risen to 5.7 per cent in one quarter under BJP.” He also said that the UPA had an unacceptable level of current account deficit and highlighted that under BJP rule, the deficit has seen a fall and has been less than 1 per cent.

Finance Minister also said, “Central government had agreed to give special assistance measures to Andhra Pradesh for 5 years.” FM added, “Earlier, this assistance was to be given by externally aided program, however, in the month of January, state govt suggested alternative methods and solution is likely to be finalised soon.”

Fiscal deficit slippage is statistical primarily due to the shortfall of GST revenue of one month in current fiscal, FM Jaitley revealed. FM also said, “Oil prices are fluctuating; inflation average at 3.6 pc in current fiscal. We have covered journey from policy paralysis to structural reforms, from the economy being in fragile five to bright spot”. He went on to say, “The tax net has widened, direct tax collection up 19.3% in Apr-Jan as a result of the campaign against black money, GST.”

Also Read
Inflation may cool off in next 2 quarters, another 50 bps RBI repo rate hike likely in September
Exporters shouldn’t rely on Rupee fall to be competitive: Piyush Goyal
Indian Economy: Slow and Steady is a Winner all the way!
Inflation rises to 7 per cent in August; RBI may hike interest rate again later this month

On GST collections, FM Jaitley said, “Collections with respect to GST will increase as anti-evasion measures are added to the indirect tax regime.” The finance minister also said about bringing down the corporate tax. He said, “The cut in Corporate tax to 25 per cent for all companies would hit tax revenue by Rs 45,000-50,000 crore which Budget can’t afford now.”