Arvind Panagariya, a free-market economist who teaches at Columbia University in the US, was today appointed… 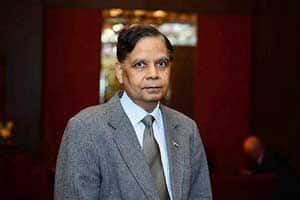 Arvind Panagariya, a free-market economist who teaches at Columbia University in the US, was today appointed the first Vice Chairman of the newly-created NITI Aayog along with six members and three special invitees.

Economist Bibek Debroy and former DRDO chief V K Saraswat were appointed as full-time members by Prime Minister Narendra Modi who will be the Chairman of the body that replaces the 65-year-old Socialist-era Planning Commission.

62-year-old Panagariya is an Indian-American economist and Professor of Economics at Columbia University. He will be the first Vice Chairman of the body. The previous avatar, the Planning Commission, had a Deputy Chairperson at the helm.

Panagariya has earlier been the Chief Economist of the Asian Development Bank and a Professor of Economics and Co-director, Center for International Economics, University of Maryland at College Park.

Holding a Ph.D degree in Economics from Princeton University, Panagariya has also worked for the World Bank, International Monetary Fund, World Trade Organization, and the United Nations Conference on Trade and Development (UNCTAD) in various capacities.

Formation of the NITI Aayog or National Institution for Transforming India was announced on January one. It will serve as a policy think-tank for the central as well as state governments with the Prime Minister as its Chairperson.

The NITI Aayog will have a governing council comprising of all state Chief Ministers and Lt Governors and will work towards fostering a ‘co-operative federalism’ for providing a “national agenda” to the Centre and States.

Besides, there would be specific regional councils, while experts and specialists from various fields would be there as “special invitees nominated by the Prime Minister”.

NITI Aayog will serve as a ‘Think Tank’ of the government as “a directional and policy dynamo” and would provide the governments at the Centre and in states with strategic and technical advice on key policy matters including economic issues of national and international importance.

At the time of announcement of the formation of NITI Aayog, Modi had tweeted: “A pro-people, pro-active & participative development agenda stressing on empowerment & equality is the guiding principle behind NITI Aayog. Through NITI Aayog, we bid farewell to a ‘one size fits all’ approach towards development. The body celebrates India’s diversity & plurality.”

The NITI Aayog, he hoped, will emerge as an active and important institution that will play a pivotal role in India’s development journey in the years to come. It will provide key inputs on various policy matters.

Modi had announced in his Independence Day speech this year that there is a need for replacing the Planning Commission by a new body keeping in view the changed economic scenario.

The government has set up the new body through a Cabinet Resolution, wherein it has invoked words of leaders like Mahatma Gandhi, B R Ambedkar, Swami Vivekanand and Deen Dayal Upadhyaya.

As per the Resolution, the NITI Aayog will provide a ‘national agenda’ for the Prime Minister and Chief Ministers to foster cooperative federalism while recognising that “strong states make a strong nation”.

It will also interact with other national and international Think Tanks, as also with educational and policy research institutions.

The new body has been set up by a resolution of Union Cabinet as was done in the case of Planning Commission which was established on March 15, 1950 by the Nehru-led Cabinet.