All pain, little gain: Demonetisation math does not add up

Of the Rs 15.4 lakh crore of scrapped money, it was estimated that 30 per cent was black, that is, around Rs 4.5 lakh crore. 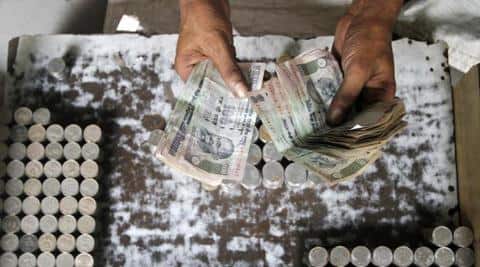 Staging a strong recovery, the rupee on Friday had gained 7 paise to end at 67.76 against the American currency, a day after succumbing to pressure created by US Federal Reserve's rate hike. (Reuters)

Revenue Secretary Hasmukh Adhia’s startling admission on Tuesday that the government expects all scrapped Rs 500 and Rs 1,000 notes to come back to the banking system raises questions about the very purpose of the disruptive demonetisation exercise, as well as its supposed benefits, say analysts.

Adhia’s statement completely negates the earlier narrative that anywhere between Rs 3 lakh crore and Rs 5 lakh crore of black money will be “extinguished” by the demonetisation drive as it will not return to the banking system — providing the Centre a windfall that would be used for pro-poor and infrastructure-related expenses.

With such a windfall now not on the cards (the RBI said Wednesday that almost Rs 12 lakh crore is already back with the banks), the math of demonetisation simply does not add up, say analysts that IANS spoke with, who contend that a simple cost-benefit analysis suggests the government — and the country — will emerge a big net loser because of the exercise.

Of the Rs 15.4 lakh crore of scrapped money, it was estimated that 30 per cent was black, that is, around Rs 4.5 lakh crore.

Given the hectic activity witnessed in the weeks since demonetisation was announced on November 8, even the most conservative estimate will have to assume that about a third of the unnaccounted money — or Rs 1.5 lakh crore — has been “taken care of” and is now back in the banking system as “legit” money. There is enough anecdotal evidence of people exploiting the Rs 2.5 lakh limit as well as Jan Dhan and other accounts for this purpose.

According to some media accounts, the Central Board of Direct Taxes (CBDT) has estimated that about Rs 1.3 lakh crore will be declared under the new income disclosure scheme (IDS) that the government announced as a seeming afterthought on November 28. The analysts were generous enough to raise this figure to Rs 1.5 lakh crore.

The remaining Rs 1.5 lakh crore is what the IT men will have to chase and recover, provided people are unable to explain their deposits. This will be a long-winded process that will play out over the next two-three years and provide no short-term payoff for the government.

So, the immediate benefit would be the Rs 75,000 crore it will collect as 50 percent tax on the amount declared under the Pradhan Mantri Garib Kalyan Yojana (as the new IDS is called). Plus about Rs 2,500 crore that it will save as interest outgo, in the first year, on the 25 per cent that has to be deposited under the IDS. This adds up to a princely sum of Rs 80,000 crore (generously rounded off).

Now set this off against the cost of the whole exercise.

The Centre for Monitoring the Indian Economy (CMIE) has estimated that the nation’s GDP will take a hit of Rs 1.28 lakh crore for the period between November 8 and December 30, the demonetisation window. It does not, however, consider the cost for the next quarter — and most economists believe it will take at least one, if not more, quarters before the economy recovers. They expect the total cost to the GDP, at the minimum, to be around Rs 1.5 lakh crore.

The actual cost of executing the demonetisation drive — printing the new notes, logistics and the like — has been estimated at Rs 20,000 crore.

Further, with banks becoming awash with cash, the government has already allowed the RBI a vastly enhanced mandate to issue market stabilisation or MSS bonds worth Rs 6 lakh crore to drain out the excess liquidity from the banks. At an average interest of 6 to 6.5 per cent per annum, these bonds will cost the RBI anywhere between Rs 30,000 crore and Rs 35,000 crore for a nine-month period, the expected timeframe in which the issue is likely to get resolved.

Of course, the government, its spokespersons and pro-demonetisation economists constantly speak of intangible “long-term benefits” such as a “move to a cash-less economy” and “widening the tax base”.

But the question analysts are asking is: Did the achievement of these noble goals merit the pain and disruption caused by the demonetisation exercise — and the almost Rs 1.2 lakh crore short-term hit the country is likely to take?