Arbitration mechanism, rating agency among deliverables for summit in Goa 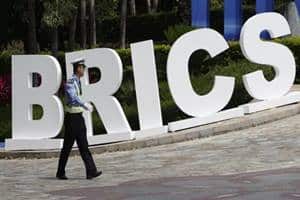 India will strongly push at the BRICS Summit for joint efforts to tackle terrorism including action against countries providing safe havens and arms to terrorists while it will also make efforts to revive the seven-nation regional bloc BIMSTEC next week in Goa.(Reuters)

After setting up the New Development Bank on the lines of the World Bank, the heads of BRICS countries are likely to resolve next month to set up a credit rating agency, with the aim of ending the dominance of the likes of Standard & Poor’s, Moody’s and Fitch. The five countries — Brazil, Russia, India, China and South Africa — which account for a fifth of the world GDP and are generally growing at a much faster pace than the global economy — are also considering developing robust arbitration mechanisms within themselves to counter the current system dominated by the advanced nations.

“These two plans are among the deliverables for the 8th BRICS summit in Goa on October 15-16,” an official told FE.

Deprived of fair representation in global institutional mechanisms such as the World Bank and the International Monetary Fund, the BRICS nations set up the New Development Bank (NDB) earlier this year. While currently the five countries hold equal stakes in the new multilateral financing agency, in future, other emerging countries might be roped in to make it a truly global development bank.

As the bloc tries to expand cooperation between the five countries, a Memorandum of Cooperation for instituting a BRICS credit rating agency is likely to be signed at the Goa summit. The think-tanks and experts of BRICS have recently held wide-ranging deliberations on setting up the rating agency after the finance ministers of the bloc called for a dialogue on the subject in April. US-based Standard & Poor’s, Moody’s and Fitch have a market share in excess of 90% in the rating business. These agencies came under the scanner in the aftermath of the collapse of Lehman Brothers in 2008, as it enjoyed the highest ratings.

Emerging countries have been complaining of the double standards of the global rating agencies and have blamed them partly for high cost of borrowings, as developing countries were rated lower compared to many western counties with poor macro-economic indicators.

India’s economic affairs secretary Shaktikanta Das had told FE last month that international rating agencies should give due weight to India’s reform steps, as they usually pay attention to such developments in developed countries. The three rating agencies have assigned the lowest investment-grade to India. “The objective of setting up the new agency is to offer impartial ratings,” the official said.

Another proposal to be taken up during India’s presidency at the BRICS is establishing high-standard arbitration mechanisms to settle intra-BRICS investor-state or company-company disputes, rather than go to forums in developed countries. Later, such arbitration mechanisms could be made part of the bilateral investment treaties with other countries.

International Commercial Arbitration as an alternative tool for dispute resolution is fast gaining popularity globally, as it offers the advantage of not going to the regular courts and thus saving time and costs. However, it is increasingly being observed that foreign companies entering into business contracts with Indian companies seem to prefer an international arbitrary institution for dispute resolution. BRICS countries, especially India, is keen to develop adequate infrastructure in this field given its talent pool.