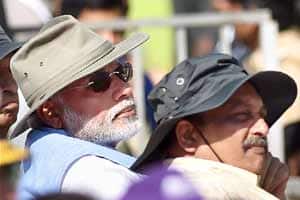 Prime Minister Narendra Modi and Defence Minister Manohar Parrikar during the inauguration of the Aero India 2015, Asia's Premier Air Show at Yelhanka Air Base in Bengaluru on Wednesday. (PTI)

Making a strong pitch to end India’s dependence on defence imports, Prime Minister Narendra Modi on Wednesday promised a conducive environment for manufacturers, including a discrimination-free tax system, and asked foreign firms not to be just “sellers” but “strategic partners”.

Inaugurating the 10th ‘Aero India’ show here, the Prime Minister said while the country needs to increase its defence preparedness and modernise its forces due to security challenges that were well known, it should aim to manufacture 70 per cent of military hardware domestically in next five years and remove the tag of being number one importer of defence equipment.

Stressing that developing domestic defence industry “is at the heart of the ‘Make in India’ programme”, he said, “We will build an industry that will have room for everyone – public sector, private sector and foreign firms”.

“From sellers, foreign firms must turn into strategic partners. We need their technology, skills, systems integration and manufacturing strength,” he said.

He said the foreign players can use India as part of their global supply chain and India’s frugal but sophisticated manufacturing and engineering services sectors can help reduce costs.

Also India can be a base for export to third countries, especially because of its growing defence partnerships in Asia and beyond, he said.

He said the government was reforming defence procurement policies and procedures.

“There would be a clear preference for equipment manufactured in India. Our procurement procedures will ensure simplicity, accountability and speedy decision making,” he said.

Modi noted that his government has raised the permitted level of Foreign Direct Investment to 49 per cent and this can go higher, if the project brings state-of-the art technology.

“We have permitted investments up to 24 per cent by Foreign Institutional Investments. And, there is no longer a need to have a single Indian investor with at least a 51 per cent stake. Industrial licensing requirements have been eliminated for a number of items. Where it is needed, the process has been simplified,” he said.

“We have to equip ourselves for the needs of the future, where technology will play a major role. As a nation of one billion people, we also have huge requirements for managing internal security,” he said.

The Prime Minister said that effort is on to expand the role of private sector, even for major platforms.

“Our goal is to provide a level playing field for all. We speak in terms of national capacity, not public sector or private sector,” he said.

This is a mega meeting of one of the largest global supply chains with the most advanced technology and complex equipment: PM — PMO India (@PMOIndia) February 18, 2015

The Prime Minister told the participating overseas delegations that for too many of them India is a major business opportunity with the reputation as the largest importer of defence equipment in the world.

“That may be music to the ears of some of you here but this is one area where we would not like to be number one,” Modi said at the biennial event, being attended by more than 250 Indian companies and 300 foreign firms.

Ruing that India spends “tens of billions of dollars on acquisitions from abroad”, Modi said government’s focus is to reduce imports and develop domestic defence industry with a sense of mission which “is at the heart of our Make in India programme”.

The Prime Minister expressed confidence that India will emerge as a major global centre for defence industry. Modi said a strong defence industry would not only make the country more secure but also make it more prosperous.

“We must ensure that our tax system does not discriminate against domestic manufacture in comparison to imports,” he said at Asia’s premier air show at the IAF Yelahanka air base on the city outskirts.

Modi pointed out that in India, the defence industry in the government sector alone employs nearly 200,000 workers and thousands of engineers and scientists.

They produce an output of nearly USD seven billion dollars annually and also supports a very large pool of small and medium enterprises, he said.

Noting that India imports up to 60 per cent in defence sector, he said there are studies that show that even a 20 to 25 per cent reduction in imports could directly create an additional 100,000 to 120,000 highly skilled jobs in India.

“If we could raise the percentage of domestic procurement from 40 per cent to 70 per cent in the next five years, we would double the output in our defence industry,” he said.

The Prime Minister said India’s defence industry will succeed more “if we can transform the manufacturing sector in the country”.

However, Modi noted that the nature of industry is such that imports will always be there.

“In turn, they can use India as part of their global supply chain,” he said.

Modi underlined that defence budgets around the world are becoming tighter.

“India’s frugal but sophisticated manufacturing and engineering services sectors can help reduce costs. India can also be a base for export to third countries, especially because of India’s growing defence partnerships in Asia and beyond,” he said.

He said this is a new era for the defence industry in India and it will be no longer enough to buy equipment and simply assemble them here.

“We have been doing this in the past, without absorbing any technology or developing our own capabilities. In some areas, we are where we were three decades ago,” he said.

Speaking candidly, he said public sector needs to do much better than they are doing now.

“We have to exploit their huge assets and a vast potential. At the same time, we have to make them accountable. We want to develop an industry that is dynamic. It should constantly stay at the cutting edge of the global industry,” he said.

We are focusing on developing India’s defence industry with a sense of mission.This is why it is at the heart of @makeinindia_ programme: PM — PMO India (@PMOIndia) February 18, 2015

Modi said his government had made export policies clearer, simpler and predictable.

“But, we will also abide by the highest standards of export controls and international responsibility. We will expand our exports, but we will ensure that our equipment and technology do not fall into the wrong hands. India’s record in this area has been impeccable and it will remain so,” he said.

Talking about offsets system, he said this was a crucial instrument to develop and upgrade Indian defence industry.

“We have introduced significant reforms in our offsets policy. I am acutely aware that it still needs a lot of improvements. We will pursue them in consultation with domestic industry and our foreign partners,” he said adding that he wants offsets policy not as a means to export low-end products, but to acquire state-of-the art technology and skills in core areas of priority.

We will build an industry that will have room for everyone – public sector, private sector and foreign firms: PM @narendramodi — PMO India (@PMOIndia) February 18, 2015

Government’s support for research and development is essential  for defence sector and, it should also be accompanied by a degree of assurance on purchase, he said.

“We are introducing a scheme to provide up to 80 per cent of funding from the government for development of a prototype in India. And, we are also launching a Technology Development Fund.

“For too long, our research and development has been confined to government laboratories…,” he said.