7th pay commission to have a bearing on ‘fragile’ state finances: Bibek Debroy

The 7th Pay Commission’s recommendations will take a heavy toll on fragile finances of states and force them to scale back their development spends, Niti Aayog Member Bibek Debroy says. 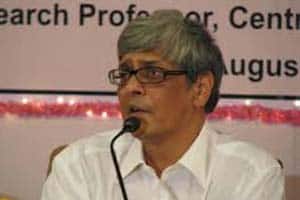 The 7th Pay Commission’s recommendations will take a heavy toll on fragile finances of states and force them to scale back their development spends, Niti Aayog Member Bibek Debroy says.

He felt that once the Centre implements the recommendations, it’s “impossible” for the states to hold back a hike in their employees’ salaries.

“There are serious repercussions arising from the 7th Pay panel report, as in the two earlier Pay Commissions, on finances of states, which will go for a toss,” he told PTI over the weekend here.

“Typically, what every state does is that if starved for cash, slash capital expenditure or development spends,” Debroy, one of three full-time members of the National Institution for Transforming India (Niti Aayog), said.

Over the years, most states have improved their finances on the back of faster growth and the states are better-placed than the Centre on the fiscal front.

He added that the Railways, which is already reeling under financial constraints, will also suffer as wages go up.

In a big bonanza for the central employees and pensioners, the Pay Commission last week recommended a 23.55 per cent increase in salaries, allowances and pension, along with a virtual one-rank-one-pension for civilians, involving an additional outgo of Rs 1.02 lakh crore per annum.

The proposals, if accepted, are effective January 1, 2016.

The move will benefit 42 lakh central staff and 52 lakh pensioners, which will be a drain of Rs 73,650 crore on the general Budget and Rs 28,450 crore on the railway budget.

Asked if he is on the same page as analysts who think that it will derail the fiscal consolidation drive of the Centre, Debroy dismissed the fears as “overstated”, saying “we should not get misled by the newspaper reports”.

Elaborating, he said news reports go only by the increase in the basic pay, but do not take into consideration the dearness allowance for employees, which will not go up in the quantum.

Bibek Debroy is optimistic that the government will be able to meet the 3.9 per cent fiscal deficit target despite slim chances of meeting the divestment target this fiscal.

A host of analysts, including those from rating agencies, have flagged concerns on implementation of the new wage report.