At about 10 am on March 11, the three military chiefs were in the meeting room of the cabinet secretariat to attend a crucial briefing. 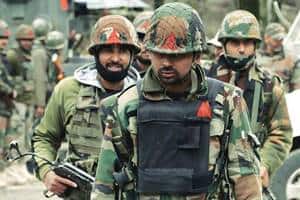 The military also wants the disability pension to be applicable on a percentage basis as it is to civilians. This was the case so far, but the 7th CPC has recommended a slab-based system for the military.

At about 10 am on March 11, the three military chiefs were in the meeting room of the cabinet secretariat to attend a crucial briefing. The Pay and Allowances Review Committee (PARC) of the three services, comprising Major General rank officers, had been allotted 45 minutes to brief the Empowered Committee of Secretaries to process the recommendations of the Seventh Central Pay Commission (7th CPC).

The Empowered Committee is chaired by the Cabinet Secretary, PK Sinha and is meant to function as a screening committee to process the recommendations with regard to all relevant factors of the 7th CPC in an expeditious, detailed and holistic fashion. The Empowered Committee consists of 13 secretaries, which includes nine IAS officers, one IPS officer and one from Railway Board. There are, however, no military officers on the committee. “We are 29.7 per cent of all central government employees, as are the Railways. They have a member on the Committee but we don’t. The IPS, with strength of only 4,675 officers, has a member,” a senior military officer told The Indian Express.

The absence of the military in the Empowered Committee has been a major cause of concern for the defence services. The emotions of those in uniform have been running high since the time 7th CPC submitted its recommendations to the government in November last year. Military officials monitoring various social media platforms told The Indian Express that they have been “shocked at the vehement anger and outrage” among military personnel “not only against the civilian bureaucracy but also senior military officials” over the recommendations of the 7th CPC.

The issue has been discussed at the highest levels in the services where fears of things going wrong, in case corrective steps are not taken to address the anomalies by the Empowered Committee, have been expressed by the military hierarchy. These fears were the reason for the three military chiefs to take the unusual step of being present for the briefing of the Empowered Committee. Even earlier, immediately after the 7th CPC submitted its report, the three chiefs had jointly written to the defence minister about their concerns over its recommendations.

According to those present at the March 11 meeting, the Chief of the Air Staff, Air Chief Marshal Arup Raha spoke before the presentation by stating that the issues about to be raised are important as there is discontent among the rank and file. Requesting the committee to look favourably at the issues, he highlighted the fact that the status of the armed forces has been downgraded in the 7th CPC, and for the military, status and honour is the most important aspect of their service to the country.

The 25-minute PowerPoint presentation by PARC raised four demands before the Empowered Committee. The first demand was for grant of a Common Pay Matrix for the military and the civilian employees. The Defence Pay Matrix of the 7th CPC has only 24 pay levels while there are 40 pay levels for the civilians. This means that all military officers will stagnate at the pay reached after 31 years of service, which will, in turn mean that their pensions will be Rs 20,000 less than their civilian counterparts.

Senior civilian government officials say that due to higher number of ranks in the military compared to the civilian bureaucracy, it is not feasible to have a Common Pay Matrix. They say that the defence services were thus offered the option of a separate pay commission, which was rejected by them. “Our attempt is to get fully integrated into the system, at par with the civilians. Going for a separate pay commission defeats that purpose. We instead want to have a member on the pay commission,” explained a military official.

In its presentation, PARC furnished the example of a CAPF DIG in Leh would be earning an allowance of Rs 57,500 while a Brigadier will get only Rs 17,000. Similarly, a military jawan deployed for disaster management like flood or earthquake relief shall get no allowance while a National Disaster Response Force will gets Rs 6,000 every time he is deployed, and a CAPF jawan will earn Rs 17,000.

“The comparison with CAPF is not fair. Some of their allowances look high because of the concept of detachment and special duty allowances. The military now wants the option, at every place, to choose between either the CAPF allowance or the military allowance, whichever is higher. This is prima facie not fair,” countered a senior civilian bureaucrat. The military’s third demand is for restoration of weightage in pensions, which has been removed by the 7th C. The weightage in terms of years of service, because of early retirement of military officials, was removed by the 6th CPC but it was restored for JCOs and jawans in 2009 by a committee headed by the then finance minister, Pranab Mukherjee. It was further enhanced by two years by the government in August 2012.

The military also wants the disability pension to be applicable on a percentage basis as it is to civilians. This was the case so far, but the 7th CPC has recommended a slab-based system for the military. It means that while an Additional Secretary would get Rs 60,000 as disability pension, a Lt General will earn only Rs 27,000.

The presentation by PARC earned a word of praise from the Cabinet Secretary who promised to go into the details. But the military is concerned as the pending six ‘core anomalies’ from the 6th CPC have not been resolved so far. A committee of secretaries formed in 2012 to resolve those anomalies, recommended that they be resolved by an expert body, the 7th CPC. But those anomalies in status and parities were not addressed by the 7th CPC.

The 2012 committee of secretaries was formed by the government after then defence minister, AK Anthony wrote in June 2012 to the then Prime Minister, Dr Manmohan Singh, warning that “There is growing discontentment among the Defence service personnel and Ex-servicemen across all ranks, due to various anomalies in the fixation of pay and pensions. My apprehension is that unless we take some corrective action, issue may take a bad turn.”

Four years down the line, the military hierarchy now fears that the former defence minister’s words may turn out to be prophetic.