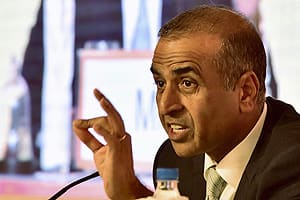 In a major relief to Bharti Cellular Ltd CMD Sunil Mittal and Essar Group promoter Ravi Ruia, the Supreme Court on Friday quashed an order to summon them in a case related to allocation of additional 2G spectrum in 2002.

While setting aside the order, a bench comprising of Chief Justice HL Daatu and Justice A K Sikri said that the CBI Judge OP Saini applied the legal principle wrongly in summoning the duo, citing their vicarious liability for acts of the companies.

The bench, however, clarified that Mittal and Ruia could be summoned as accused as and when substantial evidence against them surface, as envisaged under the criminal laws.

During the arguments, senior advocate F S Nariman, appearing for Mittal, had contended that a Managing Director cannot be held vicariously liable for a criminal offence of a company unless there was concrete evidence to show his complicity.

Nariman had told the bench that there was nothing unusual in the alleged assertion that Mittal had meetings with then Telecom Minister Pramod Mahajan and then Telecom Secretary Shyamal Ghosh.

CBI had, however, defended the decision of the 2G trial court to summon them as accused although the agency did not name them in its chargesheet. CBI described them as the “mind and nerve-centre” of the accused companies.

“The fact that they were the controlling minds of the company are the matter of evidence. They have been summoned and they have an opportunity to seek discharge before the trial court. A person or a group of persons, who have been the guiding force behind a company, are responsible for the alleged criminal act of the company,” CBI counsel K K Venugopal had argued.

He said that “guilty minds of directors or managers constitute the criminal offence of a company too” and that the CBI had evidence of Mittal’s meetings to get additional spectrum for Bharti Cellular Ltd. Venugopal had further said that such evidence was not available in Ruia’s case but the agency could investigate further.

The bench was adjudicating petitions by Sunil Mittal and Ravi Ruia against a special CBI court’s order summoning them as an accused in a case relating to grant of additional spectrum to Hutch-Essar (now Vodafone) in 2002 during the NDA government’s regime.

They sought quashing of the summoning orders. The proceedings before the trial court have been suspended by the apex court till a decision on their petitions.

Ruia, who was then a director in one of the accused companies, Sterling Cellular, is also facing trial in another case arising out of the probe into the 2G spectrum allocation case. Despite the apex court having stayed the CBI special court’s summoning order against Mittal and Ruia, both of them had appeared in the CBI court.

The top court had also pulled up the CBI for not naming them in its chargesheet as an accused when there was enough evidence against them. The special court had in March 2013 summoned Mittal, Ruia, who was then a Director in one of the accused companies Sterling Cellular Ltd and Asim Ghosh, the then Managing Director of accused firm Hutchison Max Telecom Pvt Ltd.

Besides the three, the court had also summoned as accused former telecom secretary Shyamal Ghosh and three telecom firms Bharti Cellular Ltd, Hutchison Max Telecom Pvt Ltd (now known as Vodafone India Ltd) and Sterling Cellular Ltd (now known as Vodafone Mobile Service Ltd). CBI had booked Ghosh and the three telecom firms for the offences of criminal conspiracy (120-B) of the IPC and under provisions of the Prevention of Corruption Act.

Both Mittal and Ruia in their appeals said that they were not named as an accused in either the FIRs or the chargesheets. However, based on a completely untenable premise, the petitioner has been summoned to face trial by the impugned order, the petitions stated, adding Ruia was neither the directing will and mind nor the “alter ego” of Sterling Cellular.

CBI, in its chargesheet, had named the three telecom companies as accused in the case relating to the Department of Telecommunication allocating additional spectrum which had allegedly resulted in a loss of Rs 846 crore to the exchequer. (With inputs from Utkarsh Anand)

CHRONOLOGY OF THE 2G CASE

* Jan 9, 2015: SC sets aside trial court order on summoning Mittal, Ruia as accused saying the special CBI judge is at liberty to summon them at any stage if material on record is found.