As of March 2015, 299 mega projects involving an outlay of Rs 18.13 lakh cr still remain stalled with Project Management Group, which is under direct control of PM Narendra Modi. 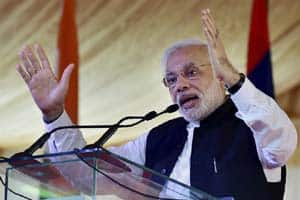 Ten months after the NDA alliance led by Narendra Modi took charge in May 2014, the government is yet to resolve the bottlenecks involving stalled projects. Latest figures compiled by the Ministry of Finance in March 2015 indicate that 299 mega projects involving an outlay of Rs 18.13 lakh crore still remain stalled with the Project Management Group (PMG).

This is hardly any headway by the government in resolving issues afflicting stalled projects as in the earlier review in November 2014, projects involving investments of Rs 18.47 lakh crore were earmarked as stalled. The Department of Financial Services (DFS) took up the issue of stalled projects at a recent review meeting with public sector banks.

Worryingly, despite the government’s claims about the reversal in the economic fortunes, proposals for new project investments and bank funding have plunged steeply.

The ministry’s report to PSU banks says that between October and December 2013, banks received 194 projects involving an investment of Rs 468,665 crore. However, during the period April 2014-January 2015, the number of new projects fell to 88 entailing an investment of Rs 141,830 crore. Banks sanctioned Rs 24,347 crore and disbursed just Rs 1,770 crore during this period, says the DFS report.

Banks, which are struggling to contain the rising non-performing assets, have been complaining about various issues like land acquisition, coal block issue, environmental clearances and a plethora of other problems for the stalling of projects. As a result, the growth rate in bank lending plummeted to 8.41 per cent by December 31, 2014 as against 16.05 per cent in December 2013.

According to the DFS report, as on February 25, 504 projects worth Rs 25.38 lakh crore were reported with the PMG for resolution of pending issues.