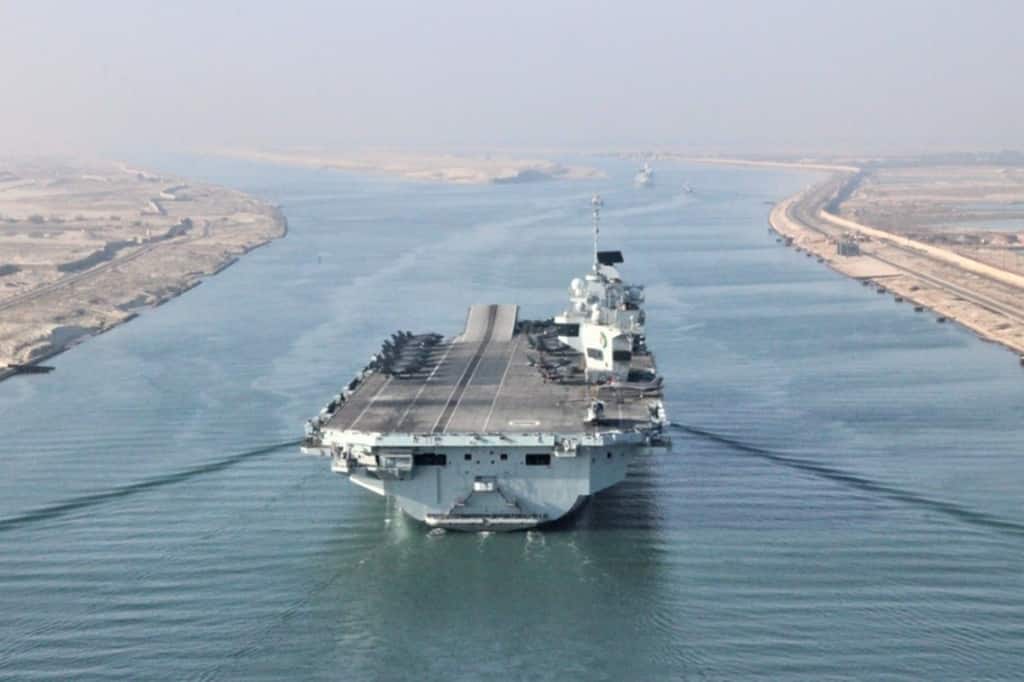 This will help both navies to further enhance their interoperability and cooperation ahead of next round of exercises which are expected to take place in the autumn when the CSG returns to the Indian Ocean. (Photo: British High Commission, New Delhi)

For the first time, the United Kingdom’s Carrier Strike Group (CSG) 2021, led by HMS Queen Elizabeth is having two days of complex maritime interactions with the Indian Navy.

In a two-day bilateral Passage Exercise (PASSEX) from July 21-22, in the Bay of Bengal the Indian Navy and the Royal Navy will be conducting close quarter manoeuvring and a wide range of multi-ship, air, sea and sub-surface maritime evolutions, too.

Also Read
The Army keeps a watch along LAC; Army Chief says condition ‘stable but unpredictable’
First ever India-Africa military exercise in March. Will be at platoon level: Army Chief
Women to break the glass ceiling again! To join Artillery Regiment soon
Agnipath Policy: Veterans weigh in whether it is laudable or laughable

This will help both navies to further enhance their interoperability and cooperation ahead of next round of exercises which are expected to take place in the autumn when the CSG returns to the Indian Ocean.

The combined forces which are participating in the exercise to include 10 ships, two submarines, around 20 aircraft and almost 4,000 personnel.

According to an official statement issued by the British High Commission in New Delhi, “The two countries are in the middle of a carrier renaissance, and the CSG is spearheading the UK’s Joint Expeditionary capability.”

“An Indian warship will also go for an exercise with the Royal Navy off the coast of the UK in August,” the statement added.

This joint drill in Bay of Bengal is going to provide a credible deterrence to those who seek to undermine global security and also substantial security to friends in the region.

What did the British officers say?

“The deployment of the Royal Navy and Indian Navy meet this month is proof of the strength, energy and significance of the growing relationship between our navies,” says First Sea Lord, Admiral Sir Tony Radakin.

According to him, “The two navies will work together in two oceans – starting month within the Indian Ocean as the Carrier Strike Group arrives for the first round of multiple UK-India exercises and later this summer in another exercise in the Atlantic Ocean.”

On the deployment of CSG, Chief of Joint Operations, Vice Admiral Sir Ben Key says: “ It is a symbol of Global Britain in action and showcasing our commitment to India, confronting threats to international order and the Indo-Pacific Region.”

On the CSG and HMS Queen Elizabeth crossing Indian Ocean, Commodore Steve Moorhouse, Commander United Kingdom Carrier Strike Group said, “At the strategic level, the exercise is a muscular expression of the closer defence partnership that Prime Ministers Johnson and Narendra Modi envisaged when they agreed the UK-India Roadmap 2030 earlier this year.”

This is its maiden operational deployment.

It will sail over 26,000 nautical miles, and will engage with 40 countries from the Mediterranean to the Indo-Pacific and back again.

According to the note issued by the High Commission in New Delhi, the fifth generation HMS Queen Elizabeth carrier is the largest surface vessel ever constructed in the UK. Taller than Niagara Falls, the 65,000 tonnes carrier’s propellers generate the power of 50 high-speed trains.

In the largest concentration of maritime and air power to leave the UK in a generation, she is leading six Royal Navy ships, a Royal Navy submarine, a US Navy destroyer and a frigate from the Netherlands.

This carrier is being jointly crewed by the Royal Air Force, Royal Navy and the US Marine Corps and is equipped with the fifth generation F-35B Lightning multi-role aircrafts.

Jagjeet Singh Grewal is Leading Engineering Technician on board and he is working in the Marine Engineering Department. Besides being responsible for maintaining aviation fuel to the highest standard, he is also responsible for the maintenance of the fueling pumps on the flight deck. This will help in the F-35B jets, Merlin helicopters and other aircraft to operate to their optimum capacity.

For the first ever drill between the two navies, Indian Navy has deployed INS Satpura, Ranvir, Jyoti, Kavaratti, Kulish and a submarine.

According to a statement issued by the Indian Navy, also deployed for the PASSEX was Anti-Submarine Warfare capable Long Range Maritime Reconnaissance Aircraft P8I.